Summary of A Letter to God

In this article, you will be reading about a letter to God summary. The author of the story,” A Letter to God” is G.L. Fuentes. He was one of the greatest writers of that time. He was a Mexican poet, novelist and also journalist. The story revolves around the idea of having unquestionable faith in God. The story here is the one taking place in a Latin American country. Lencho, a farmer, who is the protagonist of the story, writes a letter to God. In the letter, he seeks help from the Almighty as he discovers his entire crop yield has been destroyed by a devastating hailstorm. Although his wishes get fulfilled partially, if not completely, he remains ungrateful in the end. Moreover, he questions the honesty and modesty of the post-masters. However, these were the only beings who actually helped him with money (anonymously) in the name of God. 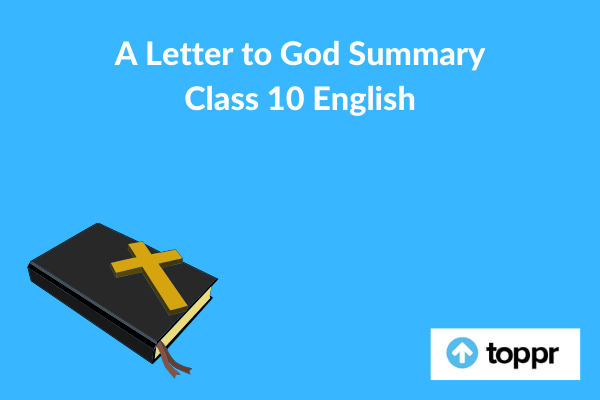 A Letter to God Summary in English

Lencho was a dedicated farmer. He was expecting a decent harvest. However, to his grief, a hail storm came and destroyed his harvest completely. Lencho was very sad. However, he had a strong belief in God. He was certain that God would help him. Also, he was an extremely straightforward man. Although working for a long time on the farm, he knew writing. Thus, he composed a letter to God. In the letter, he asked God to send him one hundred pesos. At that point, he went to the post office and put his letter into the post box.

The postman removed the letter from the letter-box. He read the address on it and laughed very much. Also, he rushed to the postmaster and demonstrated to him that strange letter. Moreover, the postmaster also laughed in the same way when he saw the address of God. However, on reading the letter, he got very serious. He lauded this man who had unquestioned faith in God and decided to help him in terms of money. He asked the employees of the post office to give charity. Moreover, he gave a part of-of his salary too. However, they were able to collect only a little more than 50 pesos as requested for by Lencho. The postmaster put the money in an envelope. It was addressed to Lencho.

On Sunday, Lencho once again came to the post-office. He asked if there was a letter for him. The postmaster took out the letter and handed it to Lencho. Lencho was not surprised after seeing the money. But when he counted the money, he became angry on God. He was sure that God could not have made a mistake. He took paper and ink and wrote one more letter to God. Then he put it into the letter-box.

After Lencho had left the place, the postmaster and the employees read the letter. In it, Lencho had complained to God that he had received only seventy pesos. Also, he requested God to send him the rest of the money this time. However, he asked God not to send the money through the mail. He wrote that the post-office employees were a bunch of crooks and thus might have stolen the money.

Conclusion of A letter to God

We learnt that Faith has the power to give us what we want, to fulfil our needs However, one must realise that humanity still prevails.