Summary of Glimpses of India

In this article, you will be reading glimpses of India summary. The chapter includes three short stories. First one is the A Baker from Goa by Lucio Rodrigues. This is a story about a baker and relates to the old Portuguese days.  The second one is Coorg by Lokesh Abrol. It is a story about Coorg, a place in Karnataka. The author describes the weather, environment, people, wildlife and the landscape of Coorg in this story. The last one is Tea from Assam by Arup Kumar Datta. This story is about two friends exploring the tea gardens of Assam and also learning the legends behind it. 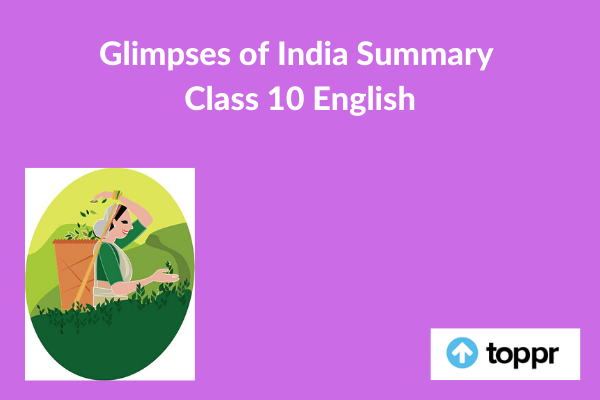 Glimpses of India Summary in English

A baker from Goa is a story that relates to the time when there was Portuguese rule in Goa. The story is of a baker living in a Goan village. During those times people ate loaves of bread. These were made in big furnaces. The bakers known as paders would come to sell these bread in the street and would make a jingle sound with the bamboo. Although, nowadays we may not see these loaves but may sometimes see the furnaces and some bakers carrying on the traditional business of their forefathers. The author remembers the coming of the baker twice a day during his childhood days. He was the author’s friend and guide. The maidservants in the author’s house would buy loaves of bread which they ate with tea.

During those days, bread was an important part of any occasion especially the sweet bread, Bol. Also, the baker had a peculiar dress, Kabai. It was a single-piece frock that would reach up to knees. Baking was a profitable business at that time.

Coorg is a story describing the Coorg or Kodagu, the smallest district of Karnataka. The author describes Coorg as a heavenly place that lies between Mangalore and Mysore. It is certainly God’s abode as it has evergreen forests, spices and coffee plantations. From September to March, the weather is good here and thus many tourists come to visit the place. The air here has the coffee aroma in it.  There’s a famous story about the Greek or Arabic descent of the Coorg people that a part of Alexander’s army had to settle here as it was not possible for them to return. They thus settled here and married with the locals. We may find people of Coorg wear Kuppia, a long black coat similar to the kuffia that Arabs wear.

People of Coorg are also very brave. The Coorg Regiment of Indian Army is one of the most significant regiments. Also, our first army chief, General Cariappa hails from Coorg. The forests and hills of Coorg provide a major source of water to the River Cauvery. Also, Mahaseer, the largest freshwater fish is found in these waters. From the top of the Brahmagiri hills, we can see the complete view of Coorg. Also, Buddhists monks live in Bylakuppe in the Island of Nisargadhama near Coorg.

The last story Tea from Assam starts with two friends, Rajvir and Pranjol travelling to Assam. On their way, they buy the tea from a roadside vendor. While sipping the tea, Rajvir tells Pranjol that people drink over 800,000,000 cups of tea throughout the world in a day. While Rajvir is looking at the beautiful and serene scenery, Pranjol is busy reading detective book. There were tea-bushes all over as far as one could see. They also saw a building which was a tea garden.

Assam has the largest tea plantations and no one knows who discovered the tea for the first time. But, there are many legends associated with it. According to a Chinese legend, a few branches of tea fell accidentally in the boiled hot water. The Emperor liked the delicious flavour. This is how it came into being. As per an Indian legend, Buddhist Monk, Bodhidharma cut off his eyelids as to avoid sleep during meditation. About ten tea plants grew out of these and thus, they banish sleep when put in hot water and drunk. Both of them got down at Mariani Junction and went to Dhekiabari Tea Estate. There they saw women plucking tea leaves. Pranjol’s father had come to receive them there and said that he knew a lot about tea plantations. Rajvir says that he is keen to learn from him.