Long Walk to Freedom is the autobiography of Nelson Mandela, who was the former South African President. This article is for Nelson Mandela long walk to freedom summary. This chapter is the extracts from the “Long Walk to Freedom” book. It includes the description of the inauguration ceremony and citations from his speech and about his journey to being a freedom fighter. It says about the other countless people who fought for their freedom.   In South Africa, a brutal practice named “apartheid” was very popular in those days. It referred to the discrimination between people on the basis of their race and colour. It was one of the most brutal societies in which dark-skinned people were deprived of their basic rights. This lesson gives us an overview of the struggles of Mandela for making the society with no discrimination on the basis of their colour, caste, race, age or gender. 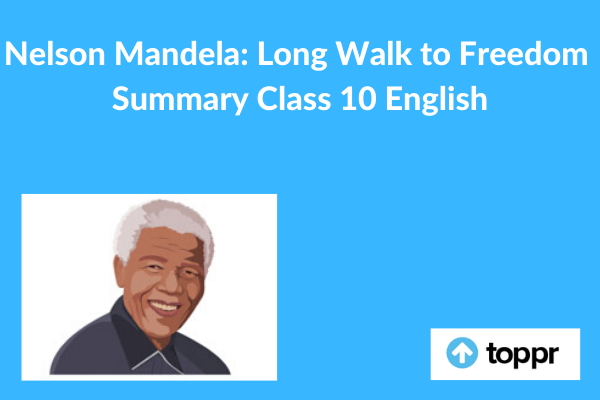 Many dignitaries from different countries had come to be part of the most significant day. In his speech, Mandela thanked all those dignitaries. Mandela assured his countrymen that his country would never ever experience the same suppression of one by another. Democracy had been established in South Africa and as a result, a government of no discrimination was established.

The people of South Africa sang two National Anthems as a symbol of that day. Mandela recalled that the reason for this movement was that Black-skinned people were exploited by the White people. He said that this type of suppression of people of South Africa is the origin of many stars. People must learn to hate first, because if they hate then they can be taught to love, as love comes from the opposite circumstances. He also says that a brave man is not that who does not feel afraid but who conquers it.

In life, a man has two major obligations. First towards his family, to his parents, to his wife and to his children and second on the other hand obligation towards his country, people and the community. Everyone fulfils his duty as per his inclination and interest. But it was very tough to fulfil in a country like South Africa. When Mandela became an adult then he understood that his freedom was only an illusion. In fact, he was the slave of exploitation. He also understood that not only he was a slave but his other family members were also.

According to him, Freedom is also mandatory for them who were suppressing others in the past. They also have the right to have it because snatcher of other’s freedom is a prisoner of the same. Thus, the oppressor is as much a prisoner as the oppressed. The oppressor too is not free.

The brave man is not the one who does not feel afraid, but he is the one who conquers that fear. Mandela said that every man has his duties towards his country and community too.