Table of content
1 Summary of The Trees
1.1 The Trees Summary in English
1.1.1 Conclusion of The Trees

Summary of The Trees

In this article, you will be reading the trees summary, a poem by Adrienne Rich. Adrienne Rich was born in Baltimore USA. She was a famous poet, essayist, and feminist. She has written this poem The Trees. This poem presents a conflict between men and nature. The poetess suggests here that the trees and plants used in the interior decoration in cities are as imprisoned. They need freedom. These trees want to move out to the forest where trees decreasing day by day due to cutting. The poetess says that everything has a deep desire for freedom. It is necessary for growth and wellbeing. We must follow the nature of laws.

This poem is a voice with a body engaged in the activities and sensing intrusion which are not organic to the conventions of a native poem. This poem is demonstrating the unsuitability of language itself as a greenhouse or container of nature. She knows that once the trees move to the forest area, the house will have complete silence. 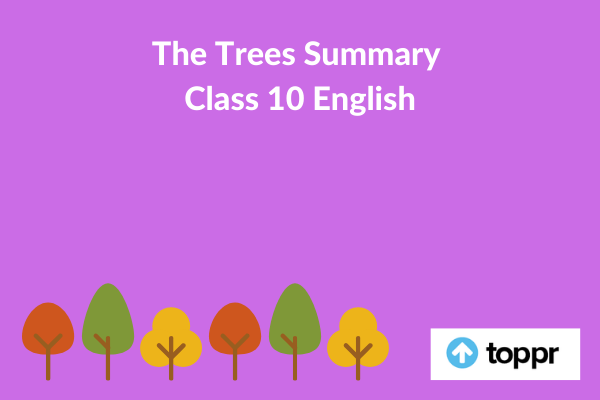 The Trees Summary in English

In this poem, “I” is the voice of the speaker of the poem Adrienne Rich.  Poem The Trees is the voice with a body engaged in the activities and sensing intrusions that are not organic to the conventions of a nature poem.  This is actually an unnatural poem that narrates the struggle of a population of trees to escape the confined surrounding of a greenhouse.  Through the trees, this poem demonstrates the unsuitability of the language itself as a greenhouse. The poetess is the witness for the trees exodus but making distances herself from participating in the making of something out of the spectacle. She can sit and write too.

Even though the speaker addresses the audience, her own head is full of whispers and she is an audience as well.  We, however, the audience to the poem, are compelled with the command. The speaker reaches across the barrier between the poem and the audience. A transaction that occurs on the page, and says for listening.

Poetess articulates her consciousness of the many levels of inner and outer and the blurring of the boundaries between them.  In the poem, the trees are in the house of the poet. Their roots work all night to disengage themselves from the cracks of the floor in the veranda. The leaves are making efforts to move towards the glass.  An open door is for the night and the whole moon and the sky is available to the speaker. This tree is at the same time, through this door the smell of leaves still reaches back in.  The speaker’s head is another interior and implicitly entered by the whispers.

The poetess is especially intrigued by the image of the trees similar to newly discharged patients. The poet is making a comparison to the long-cramped branches which are shuffling under the roof with the newly discharged patients from the hospital. As they are moving towards the hospital doors after their long illnesses. The branches have cramped under the gaps with the roof. Therefore they want to get out into the open to spread themselves in the fresh air.

Conclusion of The Trees

The Tree is a short symbolic poem and it focuses on the movement of trees that are initially indoors but seeking to escape to freedom in the forest. The trees represent the nature and womanhood in particular.