Summary of The Sermon at Benares

In this article, you will be reading about the sermon at Benares summary by Betty Renshaw. He was an author of such books like Values and Voices. In this chapter, he throws light on the early life of Lord Buddha. Lord Buddha was originally born as a prince in the royal family. However, on exposure to the sufferings of the world, he left his prince hood. Then, he went in search of salvation. Thus, he left all the worldly pleasures behind. Moreover, when he attained spiritual awakening, he gave his first sermon in the city of Benares. He made a lady named Kisa Gotami realise that men are mortal. Also, a wise person never grieves at what is unavoidable. It only enhances pain and suffering. 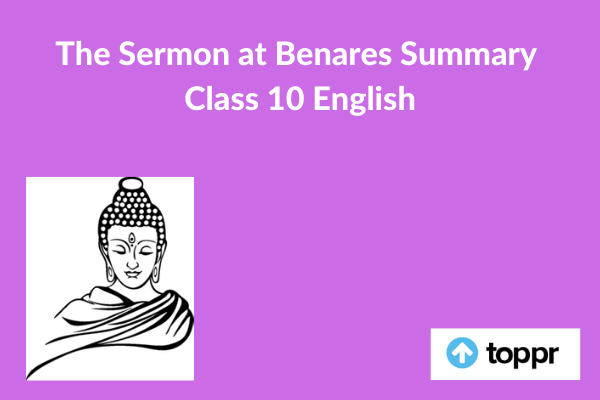 The Sermon at Benares Summary in English

Gautama Buddha was born in a North Indian royal family. He was born as a prince. Moreover, his childhood name was Siddhartha Gautama. He was sent to a faraway place to study Hindu sacred scriptures at the age of twelve. Then, upon returning after four years, he got married to a princess. Soon, they both were blessed with a son. Then, they continued to live the royal life for about ten years. The Royals were shielded from the unpleasant experiences of the world.

However, one day, on his way to hunt, the Prince met a sick man, an aged man, a funeral procession and a monk who was begging for. Such experiences acted as an eye-opener for him Hence, he left all the royalty behind to seek a higher sense of spiritual knowledge. Then, when he attained salvation, he began preaching. His first sermon given in the city of Benares. There was a lady whose name was Kisa Gotami whose son has died. She was suffering from unending pain. Thus, she went from house to house looking for medicine to make her son alive. People thought that the lady has lost her senses.

However, one day, she met a man who directed her towards Lord Buddha. He felt that Buddha could possibly have a solution for her problem. Then, Buddha asked her to look for mustard seeds and the seeds must be procured from a house where there had been no death. Filled with hope, Kisa Gotami once again went on a search from house to house but she could not find mustard seeds from a house according to Buddha’s condition. Thus, she was disheartened and sat at the edge of the road where she realised how selfish she had been. She realised the fact that men are mortal. Also, no one could escape the cycle of life. This was the only fact that Buddha wanted her to understand.

According to Lord Buddha, feelings of grief and sorrow increases man’s pain and suffering. It serves no other purpose. Moreover, it deteriorates the health. Thus, a wise person who is fully aware of nature’s functioning must not grieve at something bound to happen. This is the only way in which he can be happy and blessed.

Conclusion of The Sermon at Benares

The first sermon of Lord Buddha at Benares was the holiest. It ended the suffering of a lady who had lost her son. She accepted the truth and thus freed from pain.