India is in Southern Asia. It has the second-largest population in the world. Speaking of area, India is the 7th largest country in the world. It lies on the Indian Plate, which is the northern part of the Indo-Australian Plate. The Indian subcontinent is surrounded by three different water bodies. It is easily recognizable on the world map. This is the backdrop of Indian Geography. Let’s discuss it in detail here.

India spreads over an area of about 3.28 million sq. km. The mainland of India extends between 8°4′ and 37°6′ N latitude and 68°7′ and 97°25′ E longitude. The Tropic of Cancer 23°30′ N divides India into almost two halves. Also, the total length of the coastline is 7,517 kilometers. The Indian peninsula tapers southwards resulting in the division of the Indian Ocean into two water bodies. They are the Bay of Bengal and the Arabian Sea. 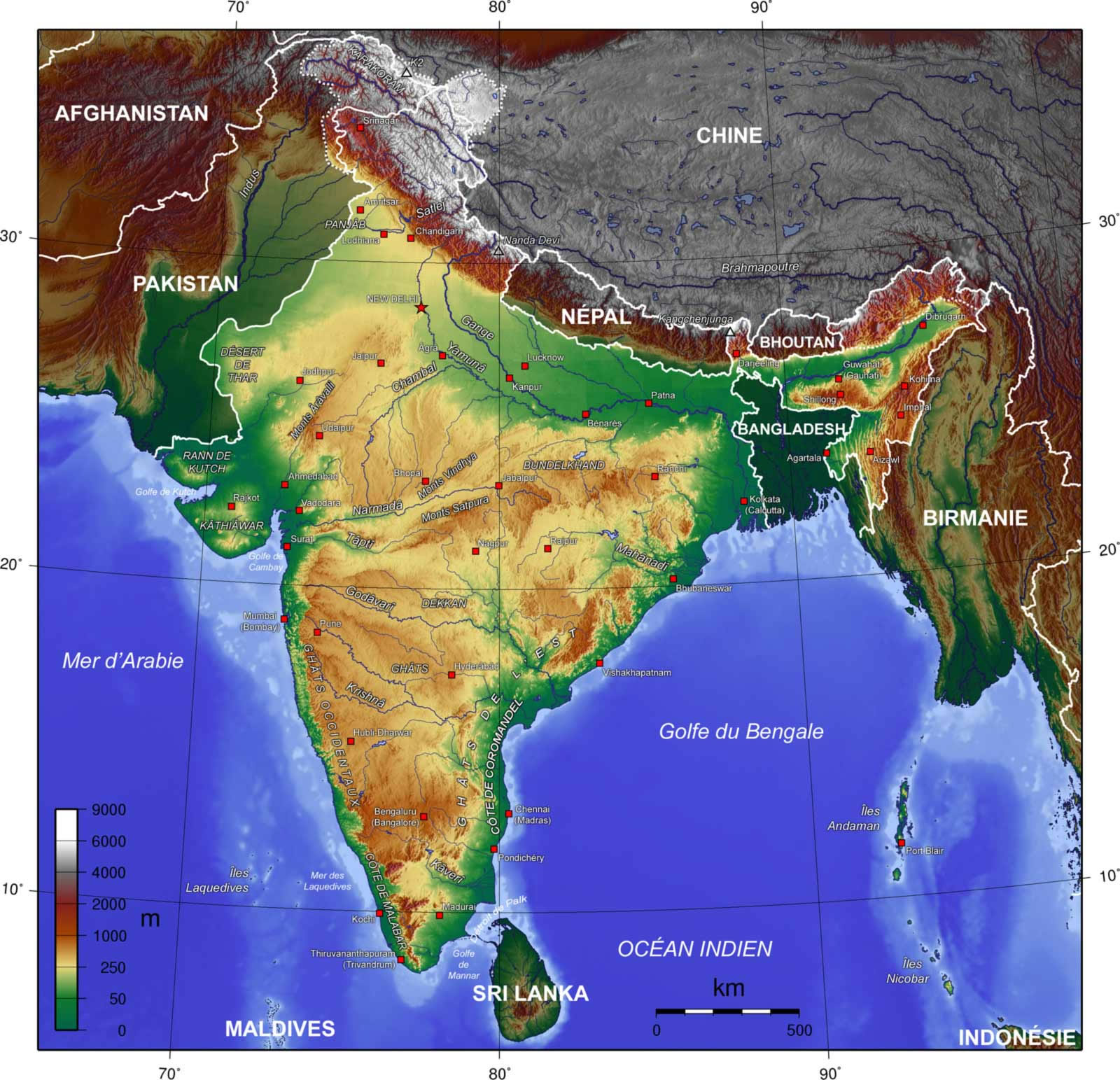 In India, there is a great diversity of landforms such as lofty mountains, deep valleys, extensive plains, plateau and coastal ghats, the desert and several islands.

India also has seven union territories. Delhi, the capital of India, fell in this category until 1991 (now National Capital Territory). The other union territories of the country include Chandigarh in the north, Dadra and Nagar Haveli and Daman and Diu in the west, Lakshadweep in the southwest and both Puducherry and Andaman and Nicobar Islands in the southeast.

India shares its international borders with seven other countries. Namely, Pakistan on its West, and Nepal, China and Bhutan on its Northeast. It has both Myanmar and Bangladesh on its East. Also, Sri Lanka lies to the South of India. Furthermore, the union territory Andaman and Nicobar Islands lie close to Thailand and Indonesia. The political boundaries of both Pakistan and Bangladesh with India are traced according to the Radcliffe Line.

The Line of Control (LoC) delineates the borders of both India and Pakistan. It serves as a boundary between the administered areas of Kashmir in both countries. Also, McMahon Line divides India and China. It runs along with the states of Arunachal Pradesh, Himachal Pradesh, Uttrakhand, Jammu and Kashmir and Sikkim. Furthermore, the India-Bangladesh border is one of the longest borders in the world. It touches the Indian states of Assam, Meghalaya, Manipur, Tripura and Arunachal Pradesh.

India is broadly divided into the following regions based on physical features:-

India is surrounded by water from three sides. The Arabian Sea in the west, the Bay of Bengal in the east and the Indian Ocean in the south. Also, there are many water bodies in India in the form of rivers, canals, gulfs, backwaters, etc. Moreover, India is a large reserve of rivers both big and small.

There are 12 major rivers in the country. The river Brahmaputra is a trans-boundary river. It originates in Tibet and enters India in Arunachal Pradesh. It passes through Assam before finally making its way through Bangladesh into the Bay of Bengal.

The river Ganga(Ganges) is the longest river in India. It is also considered the most pious river in the country. It has several tributaries including the river Yamuna, which is the only water body near the national capital, New Delhi.

There are also smaller rivers in the country which include Mahi, Betwa, Penner, Kosi, Tungabhadra and several others. Gulf of Mannar, Gulf of Kutch and Gulf of Cambay are the major gulfs of the country.

Answer: India has a variety of climates. For instance, the climate varies from the arid in the west, the alpine in the Himalayan north to the humid in tropical regions. The humid climate supports the island territories and the rainforests in the southwest. Furthermore, the climate is altered by the Thar Desert and the Himalayas. Also, some areas in the north have severe summers with extreme winters. Here temperatures reach freezing points. Furthermore, the country encounters four different types of seasons. They are winter, summer, monsoon, and post-monsoon.