Particle accelerators push charged particles at high energy and speed using an electromagnetic field. Thus, it has uses in large accelerators. Further, we also use them in medical diagnosis, therapy in oncology, and studying matter in physics. Therefore, we will study about particle accelerator in this article thoroughly. 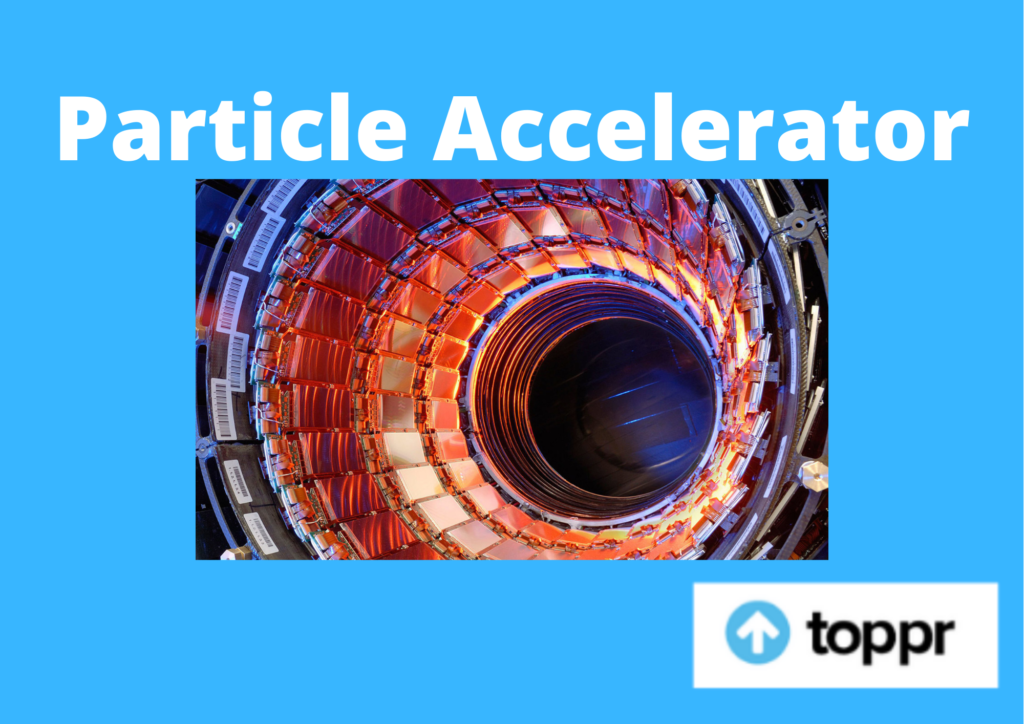 Introduction to a Particle accelerator

A particle accelerator is a machine that comes in use for propelling ions at high speed or energy by using an electromagnetic field.  Further, the hadron collider is presently the largest operator that we use in research work near Geneva, Switzerland. It accelerates beams of protons to 6.5 TeV of energy and enables them to collide for creating a mass of 13 TeV of energy. Moreover, certain other accelerators are Tevatron at Fermilab and Super KEKB in japan.

Working Principle of a Particle Accelerator

The electric field is the major factor which is essential for the operation of a Particle Accelerator. Moreover, the speed of the energy which releases by a particle beam controls with Electric field. Consequently, it helps in directing the beam towards the exact focal point of a magnetic field.

Further, the source particles like protons and electrons discharge through the beam as it travels along with a vacuum interface of a metal pipe. The reason for using a compact metal pipe is to keep the beam free of any foreign bodies like air and dust as they can cause a fluctuating result. Moreover, the additional electromagnets provide the focus the particle beam requires to travel through the metal vacuum tube.

At a certain point, the electric field within the vacuum tube that surrounds the accelerator changes from positive to negative state. As a result, Radio waves emit that initiates the acceleration of the particles in a cluster. Moreover, the beam of particles at this stage can either direct towards a target-specific location or can come in use for a collision reaction.

Moreover, the oscillator accelerator requires the electric field to work that change with time. The use of this electric field enables to accelerate particles at high energy resulting in many discoveries.

The high energy beam which generates by using this device comes in use in fundamental and applied research.  There are more than 30000 accelerators around the world. We use around 80 to 85 per cent for ion implanter and radiotherapy.

Moreover, a massive boon to Nuclear Physics, it plays a significant contributing role in X-ray production. We also refer to Particle Physics as High Energy Physics. It came into existence because of Particle Acceleration. Using various fundamental and basic principles of Physics, studying subatomic particles have become easier with the passage of time and numerous finite analysis of reactions using Particle Accelerator.

High Energy Physics- The particle physicists use these accelerators for the understanding structure of matter, space, time, and dynamics. They generate a beam of particles like positron, electron, antiproton, and proton. These particles are of high energy and interact with nuclei or with each other. The largest and highest particle accelerator is the Large Hadron Collider.

Nuclear Physics Applications and Isotope Production- The beam is used for the investigation of structure, interaction, and nuclei properties of condensed matter at high density and temperature. The cosmologist and physicists develop models that can replicate the universe. The nuclei are allowed to collide at high energy. Relativistic Heavy-ion collider is largest at Brookhaven National Laboratory.

Low Energy Machines and Particle Therapy- The beam is used in radiotherapy. The cathode ray tubes are utilized in display machines. Moreover, an ion implanter is utilized to produce integrated circuits. We use the Cockcroft Walton generator for converting AC to DC of high energy.

The skilled operators perform the applications as they come with the risk of hazardous radiation.

Question 1: Who invented the Particle Accelerator?

Answer 1: Based on the work of Norwegian Engineer Rolf Wideroe, a University of California student by the name of Ernest Lawrence built the first particle accelerator at the age of 27 in 1930.

Question 2: Where is the largest Particle accelerator located?

Answer 2: Hadron Collider, is the largest and the most powerful Particle accelerator. It is located at CERN, Geneva, Switzerland.