Light energy is a kind of kinetic energy capable of allowing various forms of lights visible to the human eyes. Light is known as a type of electromagnetic radiation produced by hot objects such as lasers, bulbs and sunlight. Let us understand it in detail. 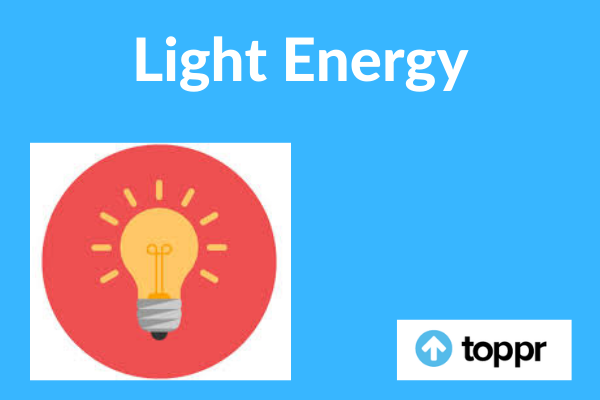 What is Light Energy?

Light produces photons which are small packets of energy. As the atoms of an object are heated, it results in the production of photons. The electrons find excitement from the heat and produce extra energy. This energy emits in the form of a photon, and more photons are released as the material becomes hotter.

The sun produces a large amount of electromagnetic radiation. Humans can only see a small percentage of this energy known as ‘visible light.’ The way solar energy flows is known as waves. Scientists can estimate the wave energy by measuring the wavelength and the distance between consecutive wavelength positions (from crest to crest and trough to trough).

Light energy is of various types. They are:

Visible light– Can only be seen through the naked eye. It’s a form of electromagnetic energy. The source of visible light is the sun. It can also emit from lanterns, flashlights, light bulbs, etc.

Infrared light– is also a form of electromagnetic energy that produces heat. TV remotes use infrared light. They travel from the remote to the TV.

X-rays and Ultraviolet light– These are short light waves used by doctors to capture images within our bodies and spot fractures in our bones. Also, dentists use x-rays to monitor the extent of the deterioration of the teeth.

Intensity: Intensity of light is the rate at which the source releases the light energy. Its power unit is a watt. It is also describable as brightness measured at the rate at which light generates in a surface unit or energy per unit time per unit area.

Frequency: Frequency of light is known as the number of crests that passes through a particular point in a second.

Wavelength: The wavelength of light is known as the distance between the two successive crests or troughs.  Light waves travel through the vacuum at the same speed. Wavelength and frequency are lightly similar, thus the higher the frequency, the shorter the wavelength.

Phase: It is a specific point in the time frame of the cyclic waveform. The intensity of light energy increase when the waves are in phase.

Light energy is measurable in various forms of units.

Q1. What are the few uses of light energy?

Answer. Uses of Light Energy are:

Light energy is a source of electromagnetic radiation that is visible to the human eye. However, there are also several industrial and science applications of light energy, some of them are:

1.Food: Light is the only source of food generation for all living things. Every organism depends on light for their energy and food, except for a few chemotrophic species, such as bacteria.

2. Vision: Many living organisms are able to see things around them due to the presence of eyes, which could be useless without light. Our eyes create an image as the light falls on them, and this information goes to the brain. Thus, light energy let us see things around us.

3. Colours: The world is so colourful, and all these colours are possible because of the sunlight. The light consists of several spectra, and each spectrum has a specific colour i.e. VIBGYOR.

5. Electronics: Solar panels use the sunlight to store light energy and convert it into electrical energy. This electrical light energy is applicable for domestic purposes as it is both eco-friendly and cost-effective.

Q.2. How does Light Energy travel?

Answer. Light energy travels very fast and flows in the form of waves.