Objects vary in how they transmit light. Whatever we see around us looks different and have different properties. Some objects are transparent, translucent and opaque. 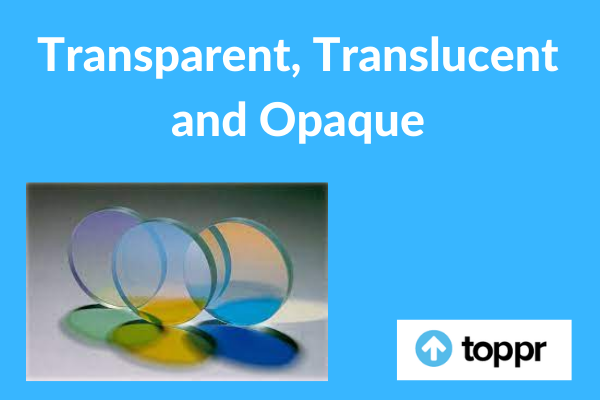 What are Transparent Objects?

What are Translucent Objects?

For instance, imagine a fogged-up glass window. If someone crosses a foggy window, you may be able to say that it’s a person but you can’t tell who or sometimes even what it is. The details will not be easily discernible. As translucent objects let some light rays pass through them but not all.

What are Opaque Objects?

Opaque objects block light and do not allow it to travel through them. Most of the light that passes through opaque objects is either reflected by the object or absorbed and converted to thermal energy. For example, wood, stone, and metals are opaque to visible light. The book cover, brick, and other such solid things are all opaque in nature. Basically, some materials can be opaque to light, but not to other types of electromagnetic waves.

FAQs on Transparent, Translucent and Opaque

Question 1: What is the difference between transparent and translucent objects?

Examples of transparent objects is a sheet of plane glass, water, air etc. Example of objects that are translucent is a sheet of polythene, a flame of the burner, fog etc.