White light is nothing but transparent daylight. It includes all the wavelengths of the visible spectrum at the same intensity. In basic terms, the light which looks white to the retina is considered white light. It contains the electromagnetic radiation at all wavelengths in the visible range of the spectrum. 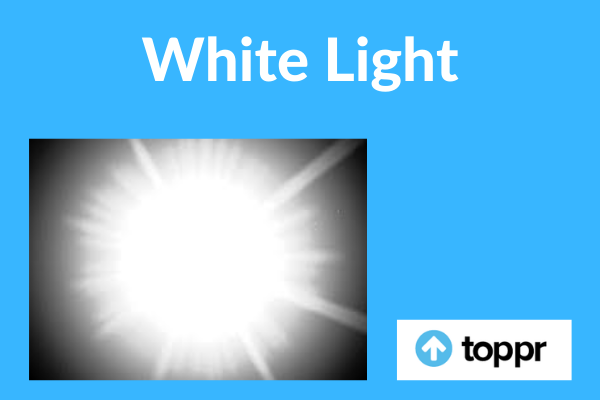 White light can be produced by various sources, both in space and artificially on earth. The Sun and other stars, for example, are generators of white light. The Sun is the most significant source of white light in our solar system. As for artificial, white LEDs and fluorescent light bulbs can produce white light. Some light bulbs, such as incandescent lamps, do not contain white light.

The light visible to the naked eye is a small part of the electromagnetic spectrum. The rainbow represents the optical or a visible portion of the electromagnetic spectrum. The infrared rays are located right beyond the red side of a rainbow, and the ultraviolet rays are present above the purple end. Unfortunately, though, they are not visible to the human eye.

Scientifically, electromagnetic radiation of 380 nm and 760 nm (400–790 terahertz) wavelength is visible to the human eye and is hence known as visible light. Other wavelengths such as infrared rays greater than 760 nm wavelength and ultraviolet rays, the wavelength of which is shorter than 380 nm, are often referred to as light.

The wavelength of White Light

The characteristics of White Light are:

Q1. What are the applications of white light?

Answer. Most objects, like the Sun in space, are a natural source of white light. The applications of white light are of different types such as:

Q2. Why do we see White Light?

Answer. Generally, we see objects around us as the white light surrounds them, usually sunlight or simple room light. White light is a combination of all colours, in approximately equal proportions. The white light is composed of 7 colours: violet, indigo, blue, green, yellow, orange and red. Also known as VIBGYOR.