Waves surround us and their presence works to channelize a number of phenomena. Imagine you are in a boat and hear the siren of a ship. In this case, you’ll be able to receive sound wave directly from the ship siren, as well as the sound wave that gets reflected by the seawater. In order to understand this concept, let us put our focus on the core concept of Superposition of Waves, together with the in-depth knowledge related to superposition theorem.

Introduction to Superposition of Waves

Let us take the example of a string wave to define the principle of superposition of wave that is based on the superposition theorem. And according to this, the net displacement of any component on the string for a given time is equal to the algebraic totality of the displacements caused due to each wave. Hence, this method of adding up individual waveforms for the evaluation of net waveform is termed as the principle of superposition. 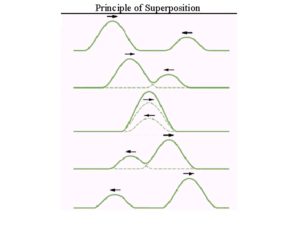 The principle of superposition is expressed by affirming that overlapping waves add algebraically to create a resultant wave. Based on the principle, the overlapping waves (with the frequencies f1,f2….,fn) do not hamper the motion or travel of each other. Therefore, the wave function (y) labeling the disturbance in the medium can be denoted as:

Hence, the superposition of waves can lead to the following three effects:

It is when two waves (similar wavelength, amplitude, and frequency) move in a specific or same direction. According to the superposition principle, the subsequent wave displacement can be written as:

This wave has an amplitude that depends on the phase (ϕ). Hence, when the two waves are believed to be in-phase (ϕ=0), then they interfere constructively. Furthermore, the resultant wave holds twice the amplitude as compared to the individual waves. On the other hand, when two waves possess opposite-phase (ϕ=180), then they interfere destructively; canceling each other out.

Do remember that, a traveling wave propagates from one place to another, however, a standing wave looks as if its still. Suppose two waves (having the same amplitude, wavelength, and frequency) move in opposite directions. Based on the principle of superposition, the final wave amplitude can be written as:

As per the superposition theorem, this wave is no longer termed as a traveling wave since the position and time dependency has been separated. In this, the wave amplitude as a function of point or location is 2ymsin(kx). To be precise, this amplitude wouldn’t travel but will stand and oscillate up and down based on cos(ωt).

Learn about the Reflection of Sound Waves here.

Q1. For destructive interference, what should be the path difference?

Ans: In case of destructive interference, the path difference is an odd number of half wavelengths.

Q2. What type of wave is produced when a motorboat sails in water?

Ans: The answer is Transverse Waves; these are produced on the water surface.

Share with friends
Previous
Life Processes
Next
Habitat and Adaptation