Suppose you have an object like a ball or a rotating disc that rotates about its centre. Now, if you move the point of rotation to the point other than its centre. How do you find the moment of inertia? The answer to this question is by the parallel axis theorem.

Before we study the theorems of parallel and perpendicular axis let us first see what moment of inertia is. Moment of inertia is the property of the body due to which it resists angular acceleration, which is the sum of the products of the mass of each particle in the body with the square of its distance from the axis of rotation.

So in order to calculate the moment of inertia we use two important theorems which are the perpendicular and parallel axis theorem. 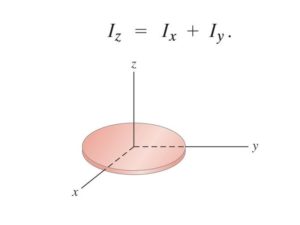 Let us see an example of this theorem:

Suppose we want to calculate the moment of inertia of a uniform ring about its diameter. Let its centre be MR²/2, where M is the mass and R is the radius. So, by the theorem of perpendicular axes, IZ =  Ix  +  Iy. Since the ring is uniform, all the diameters are equal.

Learn more about Moment of Inertia in detail here.

where, α is the distance between two axes.

Answer: C. ICM = MK², where K is the radius of gyration of the body. K = 18 cm. Moment of inertia around the axis parallel to the axis passing through the centre of mass is:

X is a perpendicular distance of the axis from CM axis and the radius of gyration for this new moment of inertia is 30 cm.