Kinematics of Rotational Motion about a Fixed Point

The rate of change of angular velocity is the angular acceleration.

Angular velocity is the time rate of change of angular displacement. We can write it as,

As we know that the rotational motion here is fixed, so there is no need to change the angular velocity. We know angular acceleration is α = \( \frac{dω}{ dt } \). So the kinematics equations of linear motion with uniform acceleration is,

Q3. Identify the direction of the angular velocity vector for the second hand of a clock going from 0 to 60 seconds? 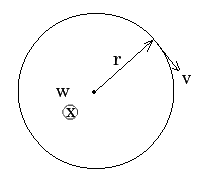