We come across many objects that follow rotational movements. No matter whether fixed or moving, these objects follow special dynamism which lets them perform their specific activity. Whether it is a ceiling fan or a potter’s wheel, these rotating objects are a system of particles that consider the motion as a whole. In the introduction to rotational dynamics of a system, we shall emphasize on the center of mass of that particle and use the same in understanding motion as a whole. 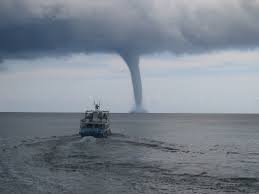 Before going deeper into the subject, we should first understand the term “Extended body”. When we refer to an object as an extended body we intend to signify it as a system of particles.  Rigid bodies are those bodies with definite shape and size. In rigid bodies, the distance between the constituting pairs of particles does not change.

The motion of a Rigid Body

Let’s consider a rigid body sliding down an inclined plane. The motion of this rigid body is in one direction, signifying therefore that all the particles are moving in a single direction. These particles are moving with the same velocity at any time interval. When all the particles in a system move with the same velocity at any instant of time, then such motion is called the translational motion. 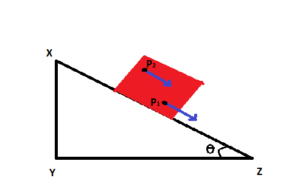 After translational motion, in our introduction to rational dynamics, we consider the rotational motion. For this, the figure below needs to be studied: 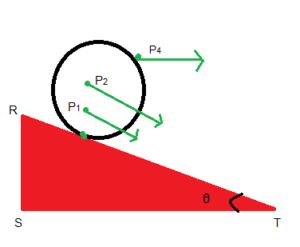 A cylinder when rolled down an inclined plane follows translational and rotational motion. Some of its particles move in the same direction while others follow a different path. To ensure their direction of motion we need to fix the movement of this cylinder body across a straight line. This straight line along which the motion of the cylinder is fixed and is called the axis of rotation. The circular motion of the cylinder is termed the rotational motion.

Rotation and Its Characteristics

In rotational motion, we know that the particles of the object, while moving follow a circular path. Every particle in the rigid body moves in a circular path along a plane that is perpendicular to the axis and has its center on the same axis. There can be two instances of rotational motion one about the fixed axis and second about an unfixed axis. The examples of rotation around a fixed axis are the fan while for unfixed axis the spinning top makes a perfect example. Here we will study rotation across a fixed axis. 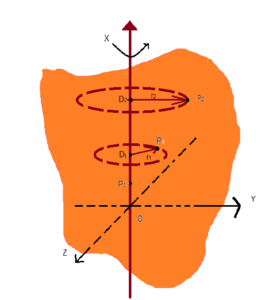 The figure above shows a rigid body’s rotation along a fixed axis. Here the axis on which the rotational motion occurs is the X-axis. If P1 is a particle of the rigid body’s system moving with its center D1 on the fixed axis then the circular plane in which the motion takes place lies in a plane that is perpendicular to the X-axis. The same situation is with another particle P2. Here both these particles move in a circular motion with their respective radius r1 and r2 at centers D1 and D2.

The point to be noted here is that though these two particles P1 and P2 move in a plane perpendicular to the X-axis, their point of rotation is different from each other. Now another particle P3 seems stationary as its r = 0. Therefore while studying an object’s motion, we sum up the movement of various particles to reach a conclusion. In rotational motion, different particles show different points of motion.

These cases where the point of the axis is not fixed for example a spinning top, we know that at a vertical point the spin is fixed. This vertical point where the top is fixed to the ground is taken as the axis of rotation. This implies that in our introduction to rotational dynamics we take every rigid body showing rotational motion as moving on a fixed axis.

Comparison Between Translational and Rotational Motion

Consider a string with several rocks tied along its length at equally spaced intervals. You whirl the string overhead so that the rocks follow circular paths. Compared to a rock in the middle of the string, a rock at the outer end moves