Consider yourself rotating around the same axis, with hands stretched. The phenomenon seems simple, but did you ever wonder that with every rotation that you make the Angular momentum changes. Now if you bring your hands closer to the axis of your rotation, what will be the inertia in such case? Let’s learn more about system of particles and rotational motion.

The magnitude of l as a vector shall be,

θ here is the angle between the relative position (r) and linear momentum (p) while p1 is the magnitude of p. We can also write this as:

r’ here is r sin θ and is a distance perpendicular from the point of origin. p’ is taken as p sin θ which is the component of p and is in a direction . to the relative position (r). Now at any point where r = 0 or when the linear momentum disappears, angular momentum also becomes a zero. Linear momentum (p) vanishes or becomes a zero when its line of direction passes through the origin or when θ is 0º or 180°.

Applying the product rule for differentiation,

Now, we already know that velocity is the change in position at some time interval, thence, dr/dt = v and p = mv,

Now since both are parallel vectors, their products shall be a zero (o). Now let’s take  dp/dt ×  r,

From the above equation, we can say that the rate of change of angular momentum is directly related to the torque on it. Torque (τ) is the external force on the particle.

Angular Momentum for Rotation About a Fixed Axis 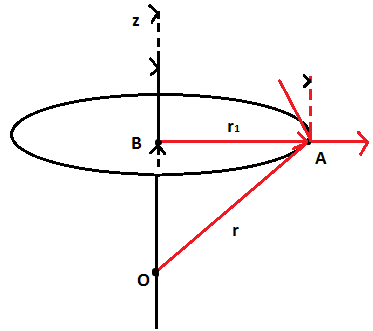 For total angular momentum(L) we take the following general equation;

As already mentioned that when we calculate the angular momentum, we initially take it on an individual particle and then sum up the contributions of the individual particle. For any particle, l= r×p. From the figure above, r = OA. Using the right angle rule, we take OA = OB+BA. Substituting these values in r we get,

r1 is the length of BA which is the perpendicular distance of point A from the axis of rotation. v is tangential at A to the circular motion in which the particle moves. With the help of the right-hand rule, we know that BA × v, which is parallel to the fixed axis. The unit vector along the fixed axis is k’. From the above equation,

Likewise, we can say that OB × v is perpendicular to the fixed axis. Denoting a part of l along fixed axis z as lz we get,

We denote L1 and Lz as the components of L that are perpendicular to the z-axis and along the z-axis respectively; hence

Here, mt and vt are mass and velocity of a tth particle and Bt is the centre of the circle of motion described by the particle t.

According to the definition of Moment of Inertia I,= mt rt 2 which is substituted in the above equation. As already said, in rotational motion we take angular momentum as the sum of individual angular momentums of various particles. Therefore,

It has to be noted that, the rigid bodies that we are considering here are symmetric in nature. For symmetric bodies, the axis of rotation is in symmetry with one of their axes. For bodies like these, every particle experiences a velocity v which is opposed by another velocity -v that is located diametrically opposite in the circle covered during the rotation by the particle. Both the negative and positive gradients of v will give L1 as zero in symmetric bodies. Hence,

For asymmetric bodies, however, L ≠ Lz and L hence do not lie along the rotational axis of the said particle.

When we take the equation, Lz =Iωk, we get

k here is a constant vector, we already know that dL/dt = τ, therefore, the external torque of only those components need to be considered which are along the axis of rotation in a fixed axis. So now we take τ = τ1k.Since the direction of Lz is fixed we assume the L= Lz+L1 therefore for a rotation along a fixed axis we get,

The angular momentum which is perpendicular to the fixed axis is constant for the particle rotating along the same axis. Now since Lz = Iωk, therefore

In a situation where the moment of inertia (I) does not change with time, the equation becomes:

With the help of Angular momentum in the rotation along the fixed axis, we can now understand how various acrobats and skaters manage their angular speed during their actions.

You must have noticed yourself that when on a rotating chair, the moment you stretch your hands the speed of rotation decreases while when your hands are brought back closer to your body, the same speed increases. This is due to the changing external torque and angular momentum. A principle that dictates the action of acrobats, skaters, and dancers during various performances, angular momentum helps them master the art with excellence!