Rigid bodies are those bodies in which the distance between particles is constant despite any kind of external force. So while studying the equilibrium of rigid bodies, we mainly aim to define the behavior of these constituting particles in changed conditions of force or torque.Since we are concentrating on the equilibrium of rigid bodies under motion, therefore we need to take both translational and rotational motion into consideration.

In the mechanical equilibrium of a rigid body, the linear momentum and angular momentum remain unchanged with time. This implies that the body under the influence of external force neither has a linear acceleration nor an angular acceleration. We, therefore, can say that:

When we sum up the above findings of translational and rotational equilibrium we get the following assumptions:

These equations are the vector in nature. As scalars the force and torque in their x,y, and z components are:

For rotational equilibrium, it is necessary that all the three components result in a zero. Moreover, as the translational equilibrium is a condition that depends on a particle’s behaviour, therefore, the vector sum of forces on all the particles must be a zero.

Equilibrium in a rigid body may also be partial in nature. Partial equilibrium of a body is that state where a rigid body shows only one kind of equilibrium. For example, consider the following figure:

The figure below shows translational equilibrium. In the figure below, the moments from forces at points P and Q are equal. The forces F are not opposite rather they act in the same sense thus causing anti-clockwise rotation of the rod. The total force hence is zero. Here, since the rod without any translation shows rotation. The kinds of force acting on the rod are termed as couple or torque.

A pair of equal and opposite forces with different lines of action that produces rotation of the body is called the torque on that body. 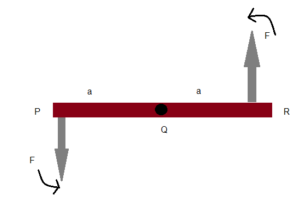 The Principle of Moments

Center of gravity is the point of balance of a rigid body. This situation is the result of the mechanical equilibrium between the two rigid bodies. For example, when you hold a book on the tip of your finger the center at which the book is balanced is called the center of gravity. The mechanical equilibrium between the finger and book has made the balance possible.

The reaction of your fingertip at the center is equal and opposite to Mg (the force of gravity). This balance is an example of translational and rotational equilibrium. The center of gravity of the book is located at the point where the total torque due to force mg is zero. Center of Gravity is, therefore, that point where the total gravitational torque on the rigid body is zero.

Q: Consider the following two statements A and B and identify the correct choice:
A) The torques produced by two forces of the couple are opposite to each other
B) The direction of torque is always perpendicular to the plane of rotation of the body

Solution: b) The direction of torque is always perpendicular to the plane of rotation of body as a cross product is in the perpendicular plane to r and F vectors and the torques produced by two forces of the couple are in the same direction to each other.