The first law of thermodynamics states that the total energy of an isolated system is constant. Energy can be transformed from one form to another, but can neither be created nor destroyed. 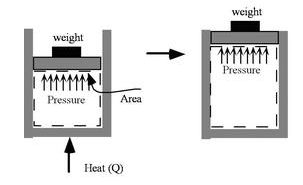 According to this law, some of the heat given to system is used to change the internal energy while the rest in doing work by the system. Mathematically,

ΔQ =  Heat supplied to the system

ΔW= Work done by the system.

ΔU = Change in the internal energy of the system.

It can also be represented as  ΔU=ΔQ−W

We can say that internal energy tends to increase when heat is given to the system and vice versa.

Limitations of First Law of Thermodynamics

Q:  Find out the internal energy of a system which has constant volume and the heat around the system is increased by 50 J?