Ionizing radiation is electromagnetic radiation that has a certain amount of energy. Moreover, the energy is adequate to overcome binding energy and keep electrons to bind with molecule or atom. In this article, we are going to discuss this radiation in detail. 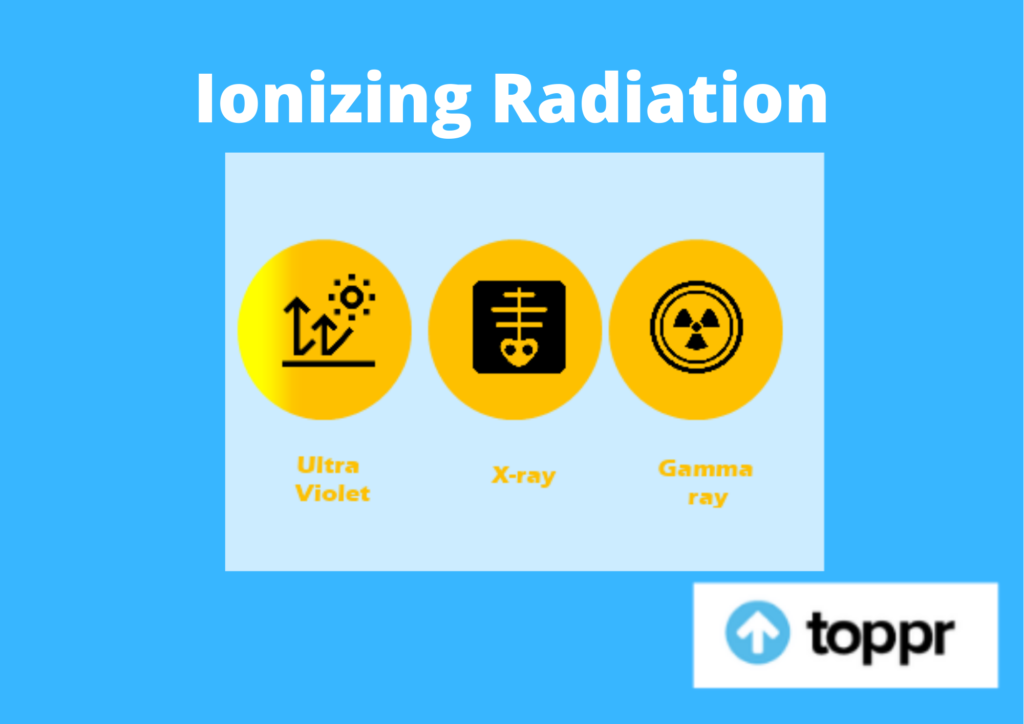 External exposure- It occurs when radioactive material via air gets deposited on your skin or clothes. Further, you can get rid of radiation by washing.

These are particulate radiations that are slow and heavy as compared to X-rays and gamma rays. Moreover, the alpha particle gets dangerous when inhaled. Further, Radon is colourless, odourless, and tasteless gas that comes from radium decay. Moreover, they are 20 times effective than gamma and X-rays. During nuclear decay, the liberated energy is shared between the alpha particle and the daughter nucleus.

Uses– Used as smoke detectors and in space probes. We also use it in radiotherapy in treating cancer.

These are electron that is smaller as compared to alpha particles. It penetrates human skin and causes tissue damage. Further, one can inhale it through contaminated water and food. The particles occur in the nuclei with excessive neutrons. Moreover, the beta particles are present in the nuclear fission of radioactive products.

Uses- We use it in a thickness detector for controlling the quality of thin material. We use Tritium as emergency lightning and fluorine-18 as a tracer for PET. Next up, we also use beta particles for treating bone and eye cancer.

It is emitted by the nucleus of certain radioactive elements. The waves are of the shortest wavelength. They are present in the radiation decay of uranium and thorium. The radiations are present in soil, rock, food, and water.

Uses- Used in pasteurization and levelling gauges in food packing. Caesium- 137 is controlling and measuring liquid flow in the industrial process while we use cobalt-60 in industrial radiography.

This radiation has a wide range of application. These includes:

Question 1: Give a few examples of Ionizing Radiation.

Answer 1: Ionizing radiation occurs all around us. Some of the most common examples of ionizing Radiation includes

Answer 2: MRI machine does not emit as much radiation as an X-Ray machine or CT scan imaging. However, due to the strong magnetic field created in an MRI machine, it is important to inform about medical implants and devices beforehand.

Question 3: What are the type of Ionization Radiation?