James Franck and Gustav Hertz first studied the Franck Hertz experiment in 1914 and presented it to the German Physical Society. Furthermore, it was the first electrical measurement of its kind that clearly showed the quantum nature of atoms. Moreover, this experiment was crucial in transforming the understanding of the world.

Franck Hertz experiment involves a vacuum tube whose design is such that it facilitates the study of the energetic electrons that flew via a thin vapour of mercury atoms. Moreover, the experiment led to the discovery that only a specific amount of the kinetic energy of an atom would lose as the collisions of the electrons take place with the mercury atoms. Also, this energy loss corresponds to decelerating an electron’s speed from about 1.3 million meters per second to zero.

An important point to remember here is that a faster electron does not completely decelerate once a collision takes place. However, the electron would lose precisely the same amount of its kinetic energy. Furthermore, slower electrons tend to bounce off mercury atoms without showing any significant loss of kinetic or speed energy. 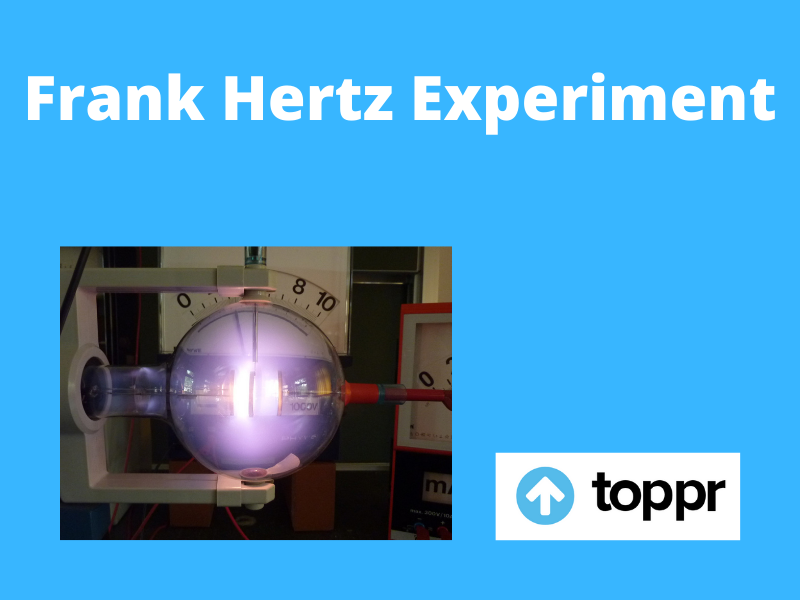 The aim of the Frank-Hertz Experiment procedure is to demonstrate the concept of quantisation of the energy levels in accordance with the Bohr’s model of an atom.

Materials required for this experiment

The original experiment made use of a heated vacuum tube of temperature 115 °C. Furthermore, the drop of mercury was of the vapour pressure of 100 Pa. Also, the fitting of the tube takes place with three electrodes.

Three electrodes that are fitted include an electron-emitting hot cathode, a metal mesh grid, and an anode. Furthermore, to draw emitted electrons, the voltage of the gird is positive with respect to the cathode.

The graph shows the following observations:

One can clearly see the energy absorption from electron collisions in case of Neon gas. Furthermore, when the accelerated electrons excite the electrons in neon to upper states, they de-excite in such a manner that there is the production of a visible glow in the gas region in which is occurring the excitation.

There are about ten peak electrons levels that lie in the range of 18.3 to 19.5 eV. Furthermore, their de-excitement takes place by dropping to lower states at 16.57 and 16.79 eV. Moreover, this energy difference is the reason why the light is in the visible range.

Share with friends
Previous
Force And Motion
Next
Frequency And Wavelength

i really have learnt alot, but its is difficult for me to register because my country(Nigeria) is not on the listed countries. pls kindly include if you can