In view of the coronavirus pandemic, we are making LIVE CLASSES and VIDEO CLASSES completely FREE to prevent interruption in studies
Biology > Cell the Unit of Life > EDTA – Formulas, Uses, Solutions

Ethylenediaminetetraacetic acid is a molecule that we know as a chelating agent.  Furthermore, it is something that has a claw-like structure that we use to stick and grab other molecules.

On one hand, its some part sticks to calcium and on the other hand, some of it sticks to metals. Moreover, doctors prescribe them to clear toxins from the body. Also, it is one of the key ingredients in cancer-fighting medicines. 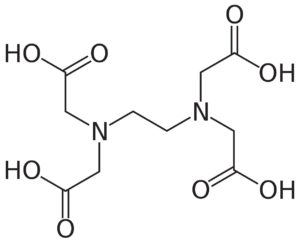 The formula of it is not very simple to get if you know the name of elements in it. It forms from 10 carbon atoms, 16 hydrogen atoms, 2 nitrogen atoms, and 8 oxygen atoms. In this way its chemical formula is C10H16N2O8.

There are various uses of it. Besides, some of them are:

It can treat brain damage due to lead exposure. Also, giving it in muscle and vein is effective against lead poisoning. However, the FDA (Food and Drug Administration) approves its calcium disodium form for this use.

In addition, it helps the body to improve from symptoms such as fatigue, abdominal pain, loss of appetite, and constipation. Also, it slows down the kidney problems caused by long-term lead poisoning. Besides, EDTA is not effective for lead poisoning diagnosis.

The FDA approves the disodium form of it for this. But, usually, doctors and healthcare providers prefer other treatments such as phenytoin (Dilantin) lidocaine. Moreover, they consider these treatments more effective and safer.

Treatment of high-level of calcium (intravenously)

Although the FDA approves its disodium form for treatment. However, healthcare providers and doctors prefer other treatment methods. Also, these other methods cause less damage and harm to kidneys.

Treatment of calcium deposits in the eye

Once the suitable preparation of the eye, a single application of disodium form of EDTA can clear calcium deposits from the eye. Furthermore, it also improves eyesight.

Giving EDTA to patients suffering from hardening of the skin in the vein does not improve their joints or skin.

EDTA solution has many medical and scientific uses. Moreover, at a chemical level, it forms coordination compounds with metal ions and inactivates them. In addition, inorganic chemists use them as a chemical buffer and biochemist use them to inactivate enzymes.

Furthermore, doctors and hospitals use them to treat calcium and lead poisoning. Also, we can use them as a preservative in cosmetic products and processed foods. Besides, creating an EDTA solution is not easy, as it does not dissolve well in water  (because of pH 7- neutral).

We require a strong base to conjunction it with water to create a solution.

For the solution fill a beaker with 900 ml (millilitre) with deionized water. After that use a balancer to measure 186.1 gram of EDTA and add it to the beaker. Also, keep stirring with the magnetic stirrer while adding the EDTA in the beaker.

Now use the balancer to measure 20 gram of Sodium Hydroxide (NaOH) and almost half of it in the solution while continuously stirring. Furthermore, add one or two gram of sodium hydroxide in the beaker every couple of hours. After some time you will see that the EDTA will start to dissolve in the solution.

This happens as the result of the solution’s pH approaches 8 (base).  Moreover, when the EDTA completely dissolves add one more gram of NaOH to the solution and stop stirring.

Now add enough water for the solution to reach the 1-litre mark.

Question. Which of the following is not a content of EDTA?

Answer. The correct answer is option D. As it does not contain an atom of magnesium.