In the nucleus, the DNA is a pack of special proteins known as histones. This helps in the formation of a complex called chromatin. The chromatin goes through further condensation to form the chromosome. A human body has 23 pairs of chromosomes. Learn the difference between chromatin and chromosomes here.

Let us understand the key difference between Chromatin and Chromosomes. 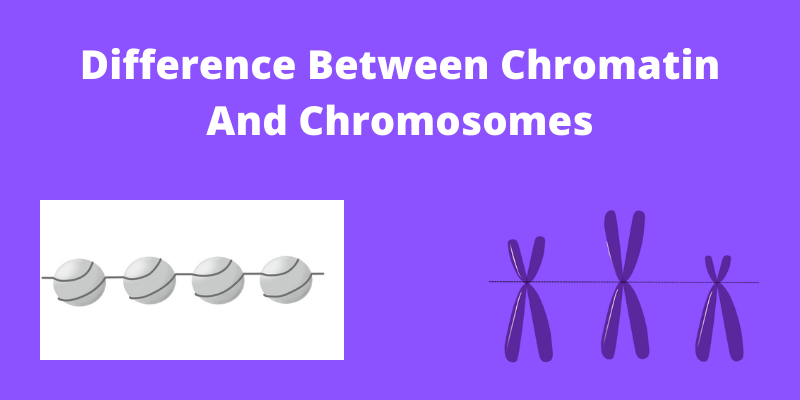 Difference Between Chromatin And Chromosomes

Chromatin is present in the nucleus of the cell and helps in making the DNA a compact unit to fit within the nucleus. The histone proteins assemble the DNA into special structures known as nucleosomes. It is further folded to configure a chromatin fiber. Its main function is to improve the strength of the DNA during cell division, gene expression regulation and DNA replication, and protecting DNA from damage.

During mitosis and meiosis chromatin benefits proper isolation of the chromosomes in anaphase, the characteristic shapes of chromosomes that takes place during this stage are the output of DNA coiling into highly condensed chromatin.

Many organisms do not follow this organization plan. For example, spermatozoa and Avian RBCs have more tight-packed chromatin that most eukaryotic cells. Spermatozoa is a motile sperm cell. Avian RBCs are the bird’s red blood cells. Prokaryotic cells have completely different structures for arranging their DNA.

Mitosis is a part of cell division while recreating chromosomes. On the other side, meiosis is a special type of cell cycle in sexually reproducing organisms used in the production of sperms and egg cells. These male and female reproductive cells are also known as gametes. Thus, the overall structure of the chromatin network is dependent on the cell division cycle.

The DNA a package of compact, thick and thread-like structures called Chromosomes. It is tightly coiled around histone proteins to form a chromosome. Chromosomes are made by the condensation of chromatin fibers.

A chromosome is a molecule of DNA and contains a bunch of genetic information. It is visible under the microscope. A chromosome is always present in the nucleus of the cells.

Chromosome differs according to the difference in the organisms. There are 23 pairs of chromosomes found in the human body. In these pairs, 22 pairs are the autosomes whereas, one pair is the sex chromosome, X and Y. Each parent gives one chromosome to each pair so that the babies get half of their chromosomes from their mother and another half from their father.

Chromatin fiber is about 10 nm in diameter. Chromatins represent DNA folded on nucleoproteins by a magnitude of 50.

Chromosomes are made by compacted chromatin. In this, the DNA is condensed 10,000 times onto itself.

Chromatin is visible in a cell through an electron microscope where it shows the typical beads on string appearance. On the other side, Chromosomes are easily visible and can be seen using a light microscope.