In chemistry, acids and bases are one of the most important parts. They also play a significant role in another field of science as well. Acids and Bases are everywhere, right from the soaps used during the shower to the citric acid or vinegar present in the kitchen. Though it is sometimes difficult to distinguish between them. Let us now discuss the difference between Acid and Base.

Those substances that accept the proton and donate electron are termed as the base. A substance capable of releasing one or more OH- ions in aqueous solution is termed as the base. The pH values corresponding to bases are always greater than 7. A base that completely ionizes in water and thus produces a large number of hydroxide ions (OH- ions) is called a Strong Base or Strong Alkali. E.g. Sodium Hydroxide and Potassium Hydroxide.

Difference Between Acid and Base 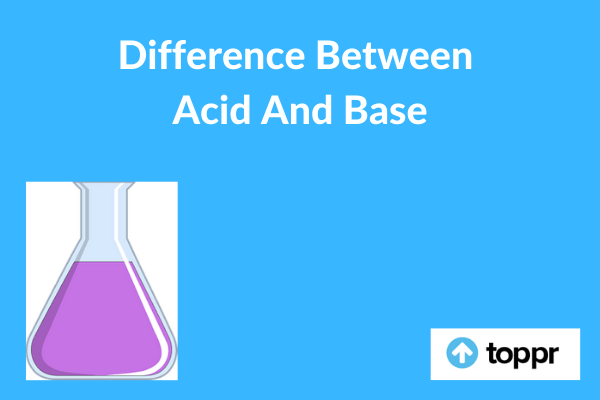 difference between acid and base

The important difference between Acid and Base

Some acids are strong and others are weak. The weak acids can hold on to some of their protons, while the strong acids let go of all of their protons. All acids will release hydrogen ions into solutions. The acid is weak or strong is determined by the number of ions that get released per molecule.

There are many uses of an acid. Some uses are sulphuric acid is used as manufacturer of fertilizers, paints, synthetic fibers, detergent, explosives, and car batteries. For making explosives such as TNT, dyes, and plastic we use Nitric acid. We use hydrochloric acid for removing oxides films from steel objects and removing scale deposits from inside the boiler.

Bases have a soapy texture when touched. Bases release hydroxide ions (OH– ions) when dissolved in water. They act as good conductors of electricity in aqueous solution. Bases are bitter-tasting substances.

FAQs about Acid and Base:

Q2. Is Strong acid the same as concentrated acid?

Q3. What is a universal indicator?

Answer: Universal indicator is the mixture of synthetic indicators which is used to find the pH of solutions.