Immunity refers to the ability of a body of destroying foreign materials and pathogens so as to prevent any further infection. Thus, you will see that the human body’s first line of defense against pathogens is via barriers like skin, mucus, layers, and saliva. Further, we refer to this as innate immunity. After that, the second line of defense is through phagocytes which the innate immunity only products. Subsequently, the third line is through adaptive immunity. Thus, active and passive immunity are two kinds of adaptive immunity. Most importantly, it is important to learn the difference between active and passive immunity to understand it better. Thus, you will learn that antibodies that produce outside and introduces in the body develop passive immunity. On the other hand, active immunity develops when antibodies produced in one’s body.

Active immunity refers to the direct response of a person’s body against the pathogens. Further, it is induced when it gets exposes to a foreign antigen, for instance, the antigen of microbes. Moreover, it refers to an adaptive response of the person after getting in contact with a particular pathogen or antigen. Further, this immunity does not take place immediately when exposed to a disease. Thus, it may take up to days or weeks after the first exposure for it to develop. However, once it does develop, the protection can last an entire lifetime. In addition, it may happen in two ways, either naturally or through immunization.

Passive immunity refers to the immunity which an individual confers through the transferring of serum or lymphocytes. Further, they get it from a particularly immunized individual. Moreover, it is a very beneficial method for conferring resistance without having to wait for the development of the active immune response. In addition, passive immunity does not require previous exposure to a disease agent. Further, it takes effect immediately, without any delay. In addition, it does not last long. In other words, may last up to a few months only. 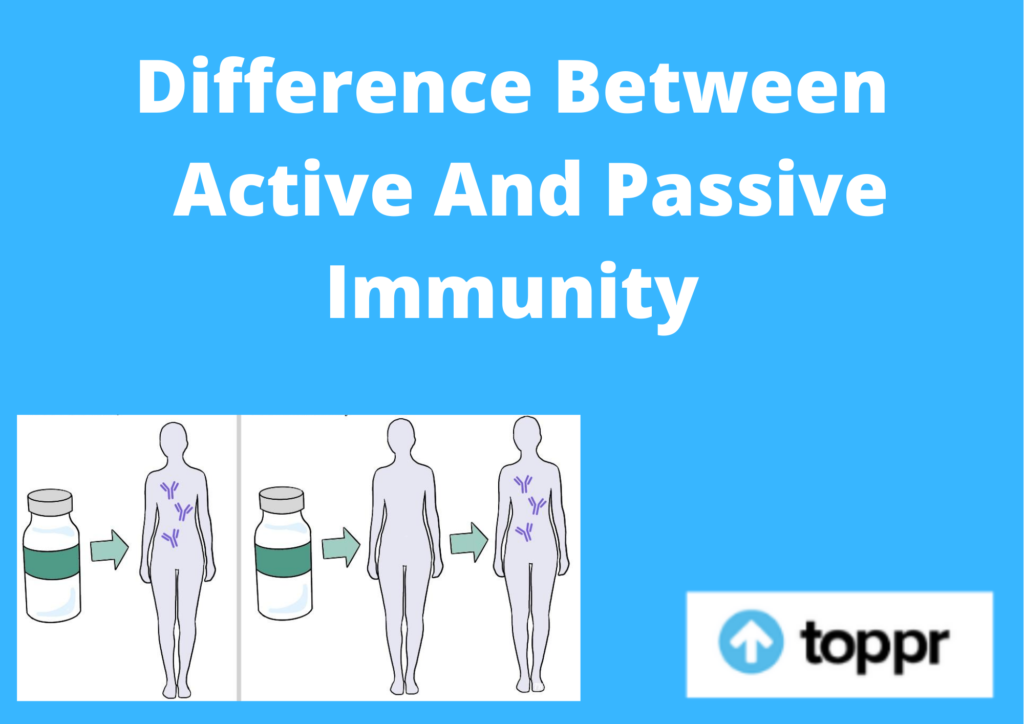 Difference between Active And Passive Immunity

Active Immunity comprises of T cells, B cells, and antigen-presenting cells. Moreover, it involves antibody production induced by infection or immunogen. Further, it results in the formation of long-lasting memory cells.

In addition, the protection it offers is long-lived. As the lag period is present, the protective response takes time for establishing. Finally, it gets reactivated by a recurrence of infection or by revaccination.

Further, there is no secondary response over here. It requires frequent re-administration for renewed protection. After that, it is useful in cases of immune-compromised, immuno-deficient, or severe combined immunodeficiency.

FAQs about Active And Passive Immunity

Question 1: State one difference between active and passive immunity.

Question 2: Give some examples of active immunity.