Angiosperms and gymnosperms are the two main categories of the plants. Both are seed-bearing plants having few similarities. This is because of the fact that gymnosperms were present for more than 200 million years before the angiosperms evolved. The main difference between these two is their diversity. Angiosperms are more diverse in comparison to the gymnosperms. The higher diversity of angiosperms is due to their wide adaptability in terrestrial ecosystems.  Angiosperms, are also known as flowering plants and having seeds enclosed within their fruit. Whereas gymnosperms have no flowers or fruits and have naked seeds on the surface of their leaves. Gymnosperm seeds are configured as the cones. Some other main characteristics which differentiate both are based on flowers, fruits, and seeds. In this article, we will deal with the detailed difference between Angiosperms and Gymnosperms in the tabular form for easy understanding.

The angiosperms are vascular plants bearing the seeds in fruits or mature ovaries. Angiosperm forms the flower which carries reproductive organs and fruits. These plants can easily adapt to the terrestrial habitat and also have a very wide distribution, around 250000 species. Fruit trees including Mango, Apple, Banana, Peach, Cherry, Orange, Pear, etc are the examples of Angiosperms. These show the flowers before they bear fruits. Grains like rice, corn, and wheat are also examples of Angiosperm. In such type of plants, the pollination process is carried out by the wind. Some other examples of Angiosperms are roses, lilies, Broccoli, kale, Petunias, Eggplant, Tomato, Peppers, and sugarcanes.

The Gymnosperms are other types of the plant which bear the seeds directly on the sporophylls but without any cover. Its name suggests that these are vascular plants of the Kingdom Plantae which bear naked seeds. Some examples of such plants are cypress, pine, spruce, redwood, ginkgo, cycads, juniper, fir, etc. The main reason for having such a less number of species is the lack of protection of the seeds. The seeds are naked and hence is unprotected after of its release. Therefore they need to get into the ground quickly to take root. Otherwise, the animals, weather conditions, or any other negative factors will damage them.

Difference between Angiosperms and Gymnosperms 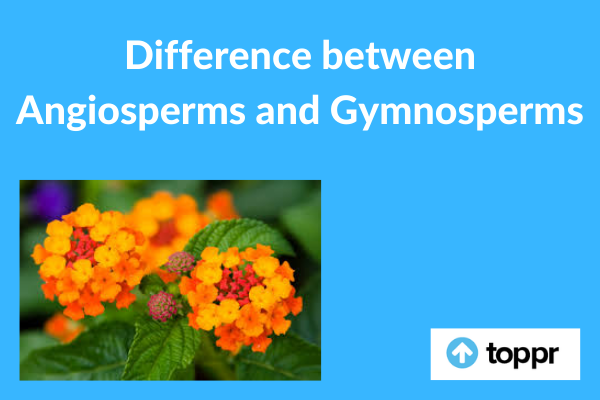 Difference Between Angiosperms And Gymnosperms

The important difference between Angiosperms and Gymnosperms

After understanding the difference between Angiosperms and Gymnosperms, let us have some more facts about these plants.

Reproduction in the angiosperms can be unisexual or bisexual. The gametes are being spread by wind and by the insect as well as by animal pollinators, attracted by their flowers. Their flowers are having both female and male gametes inside themselves. Also, after fertilization, the ovules develop into a fruit.

The gametes of the gymnosperms are found in as cones. Fertilization is described as single. Thus the pollen grains fall and germinate directly on the ovules. Pollen spores are spread by wind alone.

Angiosperms are providing virtually all plant-based food as well as the most livestock feed. Grains, fruit, legumes, nightshades which include the potatoes and tomatoes, gourds, and cabbages are all angiosperms. Other angiosperms are like cotton and flax provide the paper and textiles. The hardwood of angiosperms is useful to make the hardwood floors.

Gymnosperms are from the conifer group like pine, spruce, and fir and are commonly in use for the lumber. Other gymnosperms are processed into other products such as soap, varnish, and perfumes.

FAQs on Angiosperms and Gymnosperms:

Q.1:  Angiosperms are better than gymnosperms. Why?

Answer: Technically the gymnosperms are robust and these can survive in the variety of habitats. But, angiosperms are having two novel features which are fruits and flowers. The fruits aid in the dispersing seeds whereas the flowers provide the protection for the ovule. Therefore, angiosperms are better than gymnosperms.

Q.2: Give some popular examples of Angiosperms and Gymnosperms.

Answer: Examples of the angiosperms are monocots such as lilies, orchids, agaves, and grasses. Some others are the dicots like roses, peas, sunflowers, oaks, and maples. Gymnosperm examples are including the non-flowering evergreen trees such as pine, spruce, and fir.