The main Difference between Reptiles and Amphibians is their behavior towards the water. Amphibians spend a part of their life in water. Frogs are the best example of amphibians. Frogs spend their primitive stage in water. As tadpoles, they live in water. On the other side, snakes are reptiles. Snakes like Northern snakes live in water, but not all snakes prefer to stay in the water. Many snakes live in the desert region too.

Similarities between Reptiles and Amphibians

Reptiles and amphibians share some similarities which create confusion to decide the class of species. Reptiles include turtle, lizard, crocodiles, snakes while amphibians include frogs, salamander, toads, newts. They both are Ectothermic i.e cold-blooded. They need external heat sources to maintain body temperature.
Let’s have some detail differences between reptiles and amphibians. 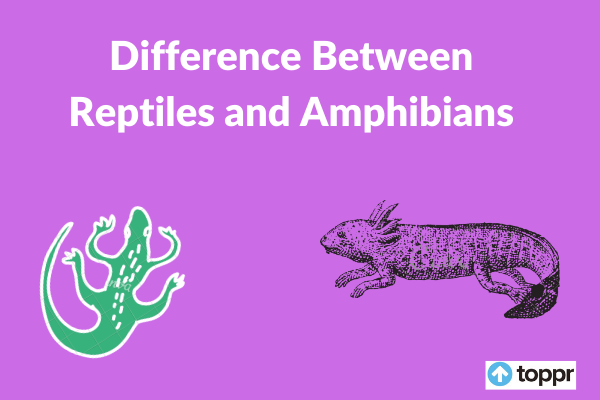 Evolution of Reptiles and Amphibians

The oldest unquestionable known reptile was Hylonomus. The origin of these reptiles lies about 300 millions year ago. It was about 8 to 12 inches long about 20 to 30 centimeters, a small lizard-like animal. Hylonomus was reptile with numerous sharp teeth as an insectivorous diet animal. The true reptiles were known as Anapsids and Diapsida. Turtles are believed to be anapsids.

They were categorized as having a spinal cord, strong solid skull, holes only for nose, eyes, etc. On the other hand, Diapsida has a pair of holes located behind the eyes higher on the skull. They further are divided into lepidosaurs and archosaurs. Lepidosaurs include snakes, tuataras, lizards whereas, archosaurs include crocodiles and birds.

The origin of amphibians lies about 350 million ago. From sarcopterygian which was similar to modern rhipidistian fish belonging to the subclass Dipnoi. These amphibians were around 195 cm long which is rare now. These lobe-finned fish have developed multi-jointed fins which helps them to crawl at the bottom of the sea.

Some fishes develop lungs at the earliest which helps them to breathe. Their bony fins evolve into limbs and could be used to hoist themselves out of the water and onto dry land in any circumstances if required.

These include mammals, birds, reptiles. Despite being able to crawl on land, few of them still spent most of their time in the water. The study of these amphibians is known as batrachology. Examples are frogs, salamanders, newts, toads.

Reptiles and Amphibians differ in many physical attributes. Amphibian’s skin is smooth and sticky with high porous, whereas reptiles have water-proof, dry, hard, and keratin covered skin.

Most of the amphibians have lungs and gills on their skin used to breathe. On the other hand, reptiles have only lungs to breathe air. Limbs and lungs make them different from reptiles. This allows them to live in water as well as on land. Reptiles usually stay on land.

Apart from these differences, reptiles, and amphibians come under the same class Reptilia. This is the reason they share many anatomical and psychological similarities. They belong to the same taxonomic category and sub-taxonomic category. They are cold-blooded and disguise for protection from predators.