Monocotyledons or monocots are the plants that consist of the seeds having only one embryonic leaf or cotyledon. These plants are commonly referred to as flowering plants or angiosperms. Wheat, grass, ginger, and onions, are the best examples of Monocotyledons.

Dicotyledons or dicots are the plants that consist of the seeds having two embryonic leaves or cotyledon. These plants are generally referred to the flowering plants or angiosperms. All legumes such as pea, peanuts, beans, and lentils, are examples of dicotyledons. These plants consist of approximately 1.0 – 1.5 lakhs species.

The shoot system is the necessary aerial part of the plant, which holds up branches, flowers, leaves, and fruits. It is also responsible for the conduction of minerals nutrients, water, and gases within the plant.

Differences Between Monocot and Dicot Stem 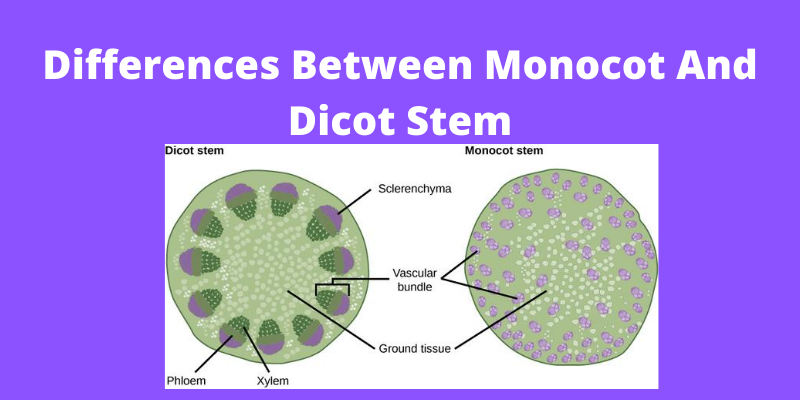 Let us understand the key differences between monocot and dicot stem

Monocot stems are surrounded by a layer of the dermis. It is circular with the lateral branches. It is generally a composition of the cells coated with a wax-like substance known as cutin. These cells are well organized, hard, and rectangular. The internal structure of a monocot stem includes a ground tissue, epidermis, a well-developed epidermis, and numerous dispersed vascular bundles. Onions, lilies, tulips, and garlic are a few of the best examples of monocot stems.

Dicot stems are surrounded with a layer of dermis along with multicellular stem hair. It consists of a well-defined epidermis with a cuticle. The internal structure of a dicot stem includes the epidermis, cortex endodermis, pericycle, hypodermis, vascular strand, and pith. Sunflower and Cucurbita are a few of the best examples of dicot stems.
The main differences usually found between dicots and monocots depend on the four aspects which include stems, flowers, leaves, and roots.