Aren’t you fascinated when you see a rainbow? The colours we see in it never fail to captivate us! Did you know that even though we identify the distinct colours of a rainbow, it is actually a continuous range of colours? A similar range of colours appears when white light passes through a prism. This range of colours is a spectrum. Let’s learn about the different forms of spectra in more detail.

Ordinary white light consists of waves of all wavelengths in the visible range. This is why, when white light passes through a prism, a series of coloured bands are seen called spectrum. This spectrum of white light ranges from violet at 7.5 x 1014 Hz to red at 4 x 1014 Hz.

Since the colours merge into each other i.e. violet merges into blue, blue into green and so on, we call it a continuous spectrum. When this light passes through an object or medium, the wave with the shortest wavelength (violet) deviates the most than the one with the longest wavelength (red).

The interaction of electromagnetic radiation with matter causes the atoms and molecules to absorb energy and go to a higher energy state. Since this state is unstable, they need to emit radiations to return to their normal states. This gives rise to emission and absorption spectra. Let’s learn about them in detail.

It is the spectrum formed by electromagnetic radiation that has passed through a medium, in which radiation of some frequencies is absorbed. Spectroscopy is the study of emission and absorption spectra.

Unlike visible light which shows a continuous spectrum of all wavelengths, the emission spectra of atoms in the gas phase emit light only at specific wavelengths with dark spaces between them. This is called line spectra or atomic spectra since the emitted radiation is identified by bright lines in the spectra.

Hydrogen molecules dissociate when we pass electric discharge through gaseous hydrogen. Subsequently, the energetically excited H2 atoms emit electromagnetic radiation of discrete frequencies giving rise to a spectrum. The hydrogen spectrum has many series of lines. These lines are named after their discoverers.

In 1885, the scientist Balmer showed that if spectral lines are expressed as wavenumber, then the visible lines of the hydrogen spectrum obey the following formula – 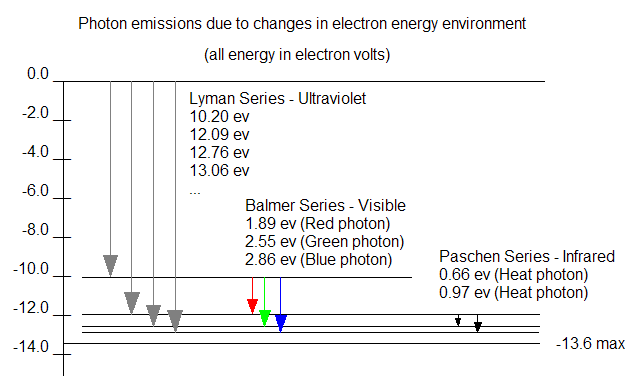 The hydrogen atom has the simplest line spectrum of all elements. For heavier atoms, the line spectrum becomes more and more complex. However, there are certain features that are common to all line spectra –

In 1913, Neils Bohr was the first to explain the features of the hydrogen atom and its spectrum. His model is based on the following postulates –

where, E1 and E2 are the energies of the lower and higher energy states, respectively. This equation is commonly called Bohr’s frequency rule.

Thus, an electron can only move in those orbits whose angular momentum is an integral multiple of h/2π. This is why there are only certain orbits.

For the hydrogen atom, Bohr’s theory describes that –

RH is the Rydberg constant and the value is 2.18 x 10-18 J. Using this equation, you can calculate the energy of any state. For example, the energy of the stationary state for n=2 will be:

The energy of an electron is taken as zero when it is not under the influence of the nucleus. In this situation, n=∞ and the atom are called an ionized hydrogen atom.

Explanation of Line Spectrum of Hydrogen

Bohr’s model can explain the line spectrum of the hydrogen atom. According to assumption 2, radiation is absorbed when an electron goes from orbit of lower energy to higher energy; whereas radiation is emitted when it moves from higher to lower orbit. The energy gap between the two orbits is –

Bohr’s model, although an improvement over Rutherford’s model, failed to account for the following points –

Question: An electron in a hydrogen atom transitions from energy level with n=4 to n=2. What is the wavelength of the emitted light?