I bet you have few angiosperms in your house.  Whatever be the environment, angiosperms can develop well and give you beautiful flowers. These plants are the most common plants and also the largest group of plants on earth. It is estimated that there are around 270,000 known species present. They account for 80% of all the living plants that are known! They have great economic importance, as they are an important source of food and a very important ecological component.

Flowering plants are called as angiosperms.  The flowering plants are the most dominant vascular plants that are found in the fauna all around the world. The pleasing and attractive colours of their flowers certainly add much more colour and brighten the landscape of any place.

Due to the presence of flowers and enclosed seeds, they are called the phanerogams. Scientifically speaking, in these plants, the seeds are enclosed, with the ovules present in a hollow ovary. 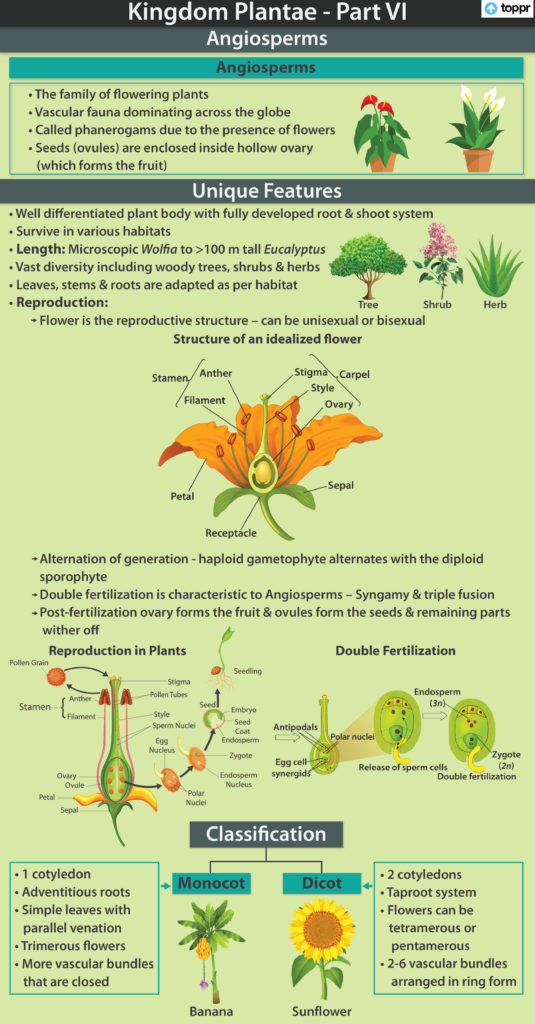 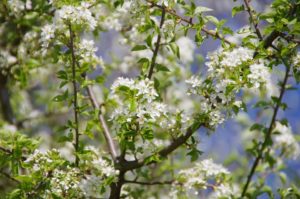 All angiosperm plants have the characteristic vascular bundle with the xylem and phloem tissues for conduction of water, minerals, and nutrients. The plant body is well differentiated with a well-developed root system, shoot system and leaves. Specialised structures called as the flowers are present. Within these flowers, the male and female gametes develop. After fertilization, when these flowers mature, fruits are formed which have the seeds within them.

Angiosperms can be found in varied habitats and can come in a different range of sizes. Wolfie is an angiosperm that is microscopic whereas the Australian mountain ash tree is about 100 meters tall. The diversity that the angiosperms display is very wide. There are many plants that are tall woody trees, shrubs, and even herbaceous plants. These plants also have many adaptations in the roots, stems and leaves depending on the habitat that they grow in.

In Angiosperms the flower is the reproductive organ. One of its basic functions is to produce seeds through sexual reproduction. The lifecycle of angiosperms shows the alternation of generations. The haploid gametophyte alternates with the diploid sporophyte. 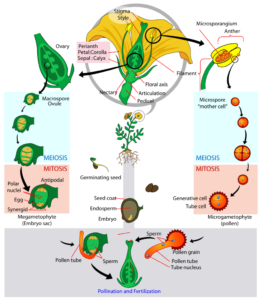 The monocots have some distinct features that include the presence of adventitious roots, simple leaves with parallel venation, and trimerous flowers. The number of vascular bundles is more and is closed. Some of the examples include bamboos, sugarcane plants, banana, cereals, lilies etc.

The dicotyledonous plants have two cotyledons with a tap root system. The venation seen in the leaves is reticulate. Flowers can be tetramerous or pentamerous. Vascular bundles are generally arranged in a ring and number between two to six. Examples include Grapes, Dandelions, Sunflower, Tomatoes, and Potatoes etc. 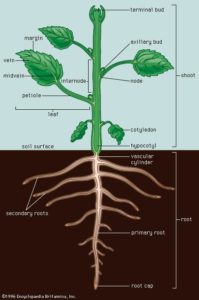 Q: Angiosperms and Gymnosperms are both seed-bearing. Justify the reason for their separate classification

Ans: Even though both gymnosperms and angiosperms are seed-bearing plants, the difference lies in the location of these seeds. In angiosperms, the seeds are located within a fruit and are enclosed. However, in gymnosperms, the seeds are naked. In both these divisions of plants, there is a difference in the structure of the male and female reproductive parts of the plant.  These are a few reasons for the separate classification.

Share with friends
Previous
Preposition of Cause, Reason, Purpose
Next
Bryophytes