When you think of forests, you picture trees, abundant lush green ferns, and other plants. But trust me the first thing that you will notice when you go to a forest is the abundant foliage of fern plants. These ferns, in biological terms, are nothing but the pteridophytes. They belong to the division Pteridophyta of the plant kingdom.

Pteridophytes are plants that do not have any flowers or seeds. Hence another name for it is Cryptogams. They include ferns and horsetails. In fact, they can be considered as the first terrestrial vascular plants, showing the presence of the vascular tissue, xylem, and phloem. Mostly, we find these plants in damp and shady places. Also, most ferns are grown as ornamental plants.

Pteridophytes display differentiation. The plant body can be divided into true root, stem, and leaves. A saprophyte is the main plant body here. Some of the species belonging to this division have small leaves called the microphylls. For example, Selaginella. Megaphylls are the large leaves that some pteridophytes have. For example, fern plants. The main plant bears the sporangia. These bear some leaf-like appendages called the sporophylls. In a few species such as Selaginella and Equisetum, the sporophylls form compact structures called cones or strobili. 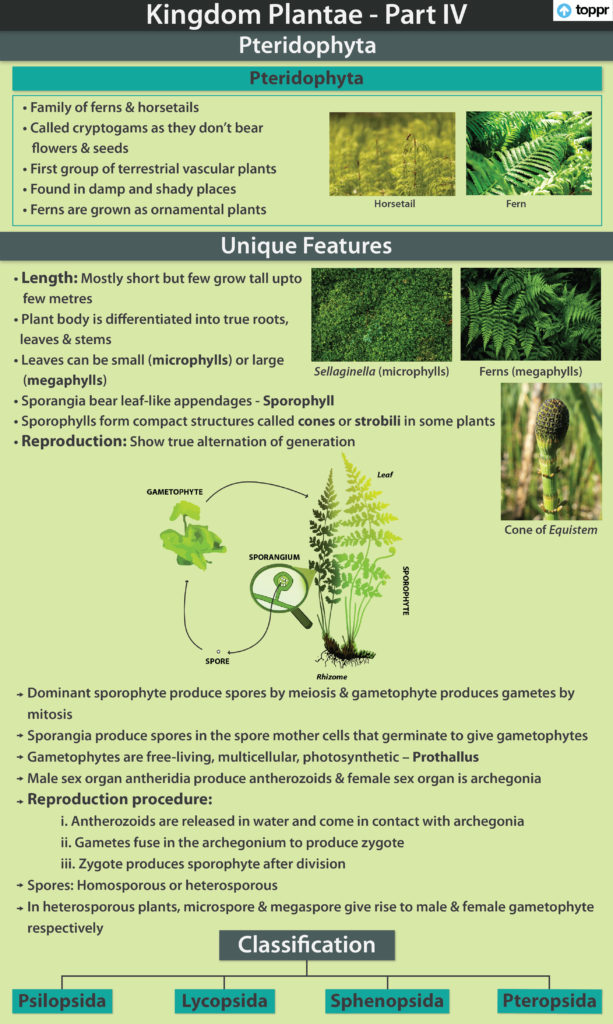 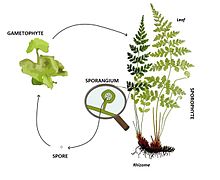 Pteridophytes show a true alternation of generations. Here, the dominant sporophyte produces spores through meiosis. The gametophyte generation forms gametes by mitosis. The spores are produced by the sporangia in the spore mother cells. These spores germinate and give rise to gametophytes.

These gametophytes are free-living, multicellular and photosynthetic. They are called as the prothallus. Generally, the gametophytes require damp and cool places to grow, due to their dependence on water. For this reason, the growth of pteridophytes is confined to certain geographical areas.

There are four classes, namely:

Learn more about the Life Cycle of Plant here in detail.

Q: Why are pteridophytes common in moist and damp areas?

Ans: Pteridophytes have a dependence on water. Reproduction and fusion of gametes can happen in the presence of water. In humid and damp conditions, fertilization occurs effectively and the reproduction is more. Hence they can proliferate more.