Did you know that plants also underwent evolution just like all other living organisms? The group of plants that we call gymnosperms is major evidence for this. These plants were the first to develop seeds. Seeds are an efficient system of dispersal. Moreover, this mechanism ensures that new plants can grow almost anywhere. And not necessarily next to the parent plant. Let us learn more about these gymnosperms.

Gymnosperm means naked seed. These plants do not have flowers. And so, the seeds are not enclosed inside any specialized structure like the ovary seen in the other group of plants i.e. angiosperms. Rather, the seeds develop on the surface of the reproductive structures of the plants. Thus are visible as cones on maturity. Sometimes we can find the seeds on small stalks too. 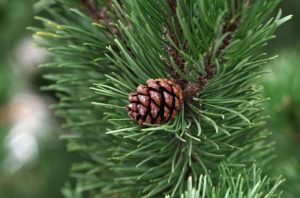 Gymnosperms have an evolutionary significance and show some unique features. Their characteristic feature is the absence of flowers and the presence of naked, open seeds. As they do not have flowers, consequently, fruits are also absent in these group of plants.

The main source of pollination and dispersal is wind. These are generally medium to large trees, with a few shrub species also present. Sequoia is a gymnosperm which is one of the tallest tree species.

The plant body shows differentiation and is divided into leaves, stem, and roots. The leaves are needle-like with a thick cuticle and sunken stomata, as seen in conifers. This feature helps in the reduction of water loss due to transpiration.

The root system present in the gymnosperms is the taproot system. In some plants, these roots have an association with fungi and form mycorrhiza, e.g. Pinus. While in a few other species like the Cycas plant, the roots are in the form of specialized roots called coralloid roots and are associated with nitrogen-fixing cyanobacteria. These plants are also vascular, with both xylem and phloem being present. 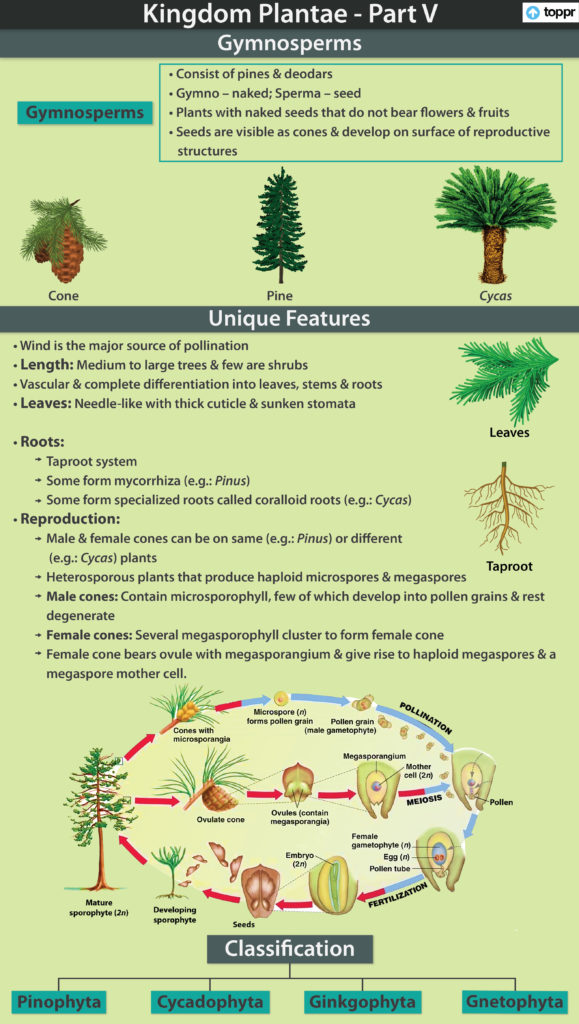 Reproduction and Fertilization in Gymnosperms 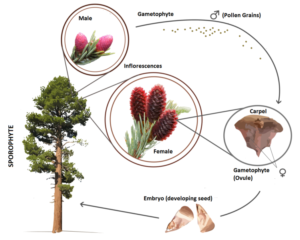 Strobilus or cone is the reproductive structure of gymnosperms. Both male and female strobili can be present on the same (seen in Pinus) or on different trees (seen in Cycas). Gymnosperm plants are heterosporous. They produce different spores, which are the haploid microspores and megaspores.

Male Cones – the male strobili or male cones have microsporophylls, which have the microsporangia that produce the haploid microspores. Some of these microspores develop into male gametes called the pollen grains, while the rest degenerate.

Female Cones – the megasporophylls form a cluster and are called as the female strobili or cones. They bear the ovules having the megasporangium. Thus produces the haploid megaspores and a megaspore mother cell.

Fertilization – When the pollen grains are released from the microsporangium, they get dispersed through wind and reach the female cones. The pollen grain develops a pollen tube, which grows towards the archegonium.

The discharge of male gametes happens near the mouth of the archegonium. The fusion of the male and female gametes occurs. After fertilization, a zygote develops to form the embryo and the ovule forms the seed. The following figure shows the life cycle of a gymnosperm.

Read about the Unique Features of Bryophytes here.

The four divisions of Gymnosperms include

Q. How do you classify oak and pine trees?

Ans. Oak and Pine trees belong to two different divisions of the plant kingdom. Furthermore, Oak trees have seeds that lie inside their acorns. Here seeds are present inside and are not naked. Thus Oak trees will be classified under Angiosperms.

Pine trees, on the other hand, have naked seeds, with single needle-like leaves. These are the characteristic features of Gymnosperms and will be classified under the same.