Who is not familiar with moss, the thick green mat that grows on the surface, seen mostly in the lawns? Well, these plant-like structures are the bryophytes. To know about the plant kingdom, step out into your gardens and start observing! There is a lot more to discover and learn practically!

Bryophytes are plants that are found growing in moist and shady places. Something unique about these plants is that they can survive on bare rocks and soil. They play an important role in plant succession on bare rocks. They show alternation of generations and have a unique nickname. So they are called the amphibians of the plant kingdom. Though they grow in a terrestrial environment, they are dependent on water for the reproduction process. 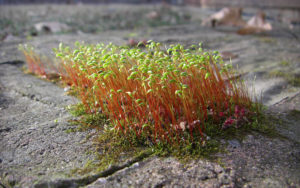 Though not as complex as other plants, bryophytes live in humid and shaded places. But, they can be also found in arid forests, rainforests, apart from the alpine habitats. They are widely distributed throughout the world. You can see them growing on varied surfaces like rocks, soil, tree trunks, bones, rotting wood etc.

The tissue organization is not complex. But, they do display some amount of diversity. Some bryophytes maybe just over a millimetre long and some are a meter long too. They contain chlorophyll and can synthesize food through the process of photosynthesis. The plant body is slightly differentiated, though they do not have true roots, stems, and leaves. They generally have something similar to roots called the rhizoids. The main body of the bryophytes is more thallus like and haploid. Bryophytes are spore-producing plants that do not have a vascular tissue. They reproduce through gametes and hence have earned the name gametophytes. The sex organs of bryophytes are multicellular. Anthredium is the male sex organs while the female sex organ is called archegonium. The archegonium is a flask-shaped organ and produces a single egg. The anthredium produces antherozoids, which have two flagella.

When the antherozoids are released into the water and when they come in contact with the archegonium, a fusion of the gametes occurs and a zygote is produced. The zygote remains in the archegonium for some time. It then undergoes many cell divisions that are mitotic in nature and produces an embryonic sporophyte. This growing embryo is covered by a protective structure, called the calyptra. Bryophytes are classified into two main divisions. They are:

As bryophytes can survive on bare rock, they can initiate soil formation in any barren terrain of land. They can maintain the soil moisture and also help in the recycling of the nutrients in forest vegetation.

Apart from this, there a few economically important bryophytes such as the peat moss. It is harvested, processed and sold. It is used in horticulture as well as a fuel. Because of their capacity to hold water, they are sometimes used as packing material for shipment of living material.

Q: In bryophytes, where is the sporophyte generally located and where does it obtain its nutrition?