Transfer of heat energy takes place usually through any one of the three processes of Conduction, Convection and Radiation. In conduction, transfer of heat energy takes place with the process of microscopic collisions of particles within a body. Moreover, in radiation, heat, light and energy through any source is sent out from something. In Convection, it happens because of the heat transfer due to the bulk movement of molecules within fluids. In this article, we will talk more about convection currents.

Convection is such a process of heat transfer that takes place only in the cases of liquids and gases. The reason behind this is the free movement of molecules in such states of matter. However, the transfer of heat energy can only take place through Convection when there is a considerable difference in temperatures of the two parts of the fluids. 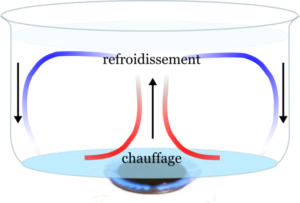 We can define convection currents as a natural process of heat transfer involving the movement of energy and heat from one place to another. We can exemplify it by observing that we feel hotter when we place our hands above a campfire. This happens due to convection currents.

As we all know that equator is the part on Earth that is nearest to the sun and therefore receives much greater heat. Due to this the air which is near the equator rises upwards as it becomes less dense and later out it spreads out and again descends towards the equator. This process is responsible for the continual circulation of air which is called wind. It is due to the process of atmospheric convection currents that the clouds are kept aloft.

There exists molten rocks deep inside the Earth’s surface which circulate through convection currents. Being in a semi liquid state the molten rocks start rising up after becoming more and more hotter and less dense. It further loses heat into the Earth’s crust and becoming less dense sinks back to the Earth’s core. This process is responsible for the heating up of Earth’s surface. It is even believed by some geologists that occurrences of earthquakes and volcanoes happen due to convection currents.

Water from the cold polar regions draws down from higher latitudes and it further sinks in the bottom of the oceans. Gradually, the cold water goes down and pulling warm water with it. This process is responsible for the distribution of heat and soluble nutrients all around the world.

Convention in Our Houses

When it’s the season of winter, most of us use heaters or radiators in our houses. They also work based on the process of convection. When the air above the radiator heats up it becomes lighter and rises up. Then the cooler air above it replaces it and hot air moves up this process continues to happen in a cyclic movement.

This process keeps on repeating itself until the entire room becomes warm. Hence, we can see that convection is an important phenomenon of nature and it is of great use in our daily lives too.

Ques. Which of these happen as a result of convection?