Our atmosphere supports life on Earth. The atmosphere consists of thin layers of gases. These gases form the 5 layers of the atmosphere from top to bottom. These layers are named in sequence as -1) Troposphere 2) Stratosphere 3)Mesosphere 4) Ionosphere & 5) Exosphere. The stratosphere is the second most layer of the atmosphere spreading up to the height of about 50 km from the surface of the earth and is ideal for flying aircraft. 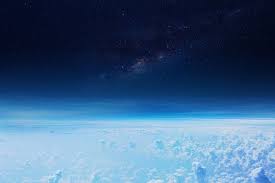 It extends up to a height of 10 to 50 km. From the earth’s surface. The average height is however 40 km. At the poles, the stratosphere starts at about 8 km. So it is nearest to the poles.

The stratosphere is a very calm & stable layer unlike the troposphere, which is a turbulent layer. This layer is calm and stable because of the absence of any vertical air currents. The reason for this is that the vertical air current flows from the warmer (lower ) layer to the colder (upper) layer.

The stratosphere is free from any weather disturbance like a thunderstorm, clouds, turbulence, etc. This is because of the absence of any conventional current flow, as explained above. Therefore, this layer is suitable for flying jet aircraft. The aircraft always flow up to a height of above 10 km.

5. The flow of jet streams

Thus, they are able to save on time & fuel costs. For example, a flight from London(Europe) to New York (America) takes lesser time than a flight from New York to London because of a jet stream.

Stratosphere is the region where about 90 % of ozone is formed. Ozone (chemical formula: O3 ) is a gas that is formed by the action of the sun’s rays on oxygen present in the stratosphere.

Ozone is important as it absorbs harmful ultraviolet rays of the sun. Ultraviolet rays destroy human cells and are harmful to life on earth. Thus stratosphere supports life on the earth.

Q. Why the use of chlorofluorocarbons is banned worldwide?

Ans: Chlorofluorocarbons were widely used in refrigerators, fire extinguishers, etc. A few years a hole had been found in the atmosphere, over Antarctica by the scientists. The reason for the hole was the destruction of ozone by chlorofluorocarbons. This allowed the harmful UV rays from the sun to reach the earth’s surface. So, in 1996 the use of chlorofluorocarbons was banned worldwide.

Share with friends
Previous
What is Hectare? - Definition and Conversion
Next
Rain Gauge - Definition, Types, and How to Make it?