Table of content
1 Doldrums
1.1 What are Doldrums?
1.2 Relation of Global Wind Circulation
1.3 Effects on Weather
1.4 Characteristics of Doldrums
1.5 Solved Question for You

Everyone is familiar with the term ocean and current but most of the people do not know about doldrums. Furthermore, it is a common phenomenon that the sailor around the world is very familiar with. Generally, this is found near the equator region.

Doldrums is a natural phenomenon that happens near the equator. In addition, it is an oceanic belt that circles around the globe.

The region has low atmospheric pressure and lack of a significant amount of wind. Also, the weather in the region is cloudy and rainy.

This zone or region is often known as the convergence zone or ITCZ (Intertropical Convergence Zone). Besides, they approximately lie between five degrees north and five degrees south latitude. 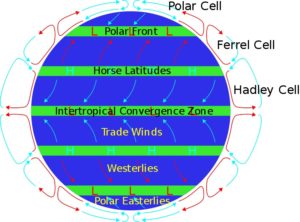 They fit perfectly in the global pattern of the atmospheric circulation of wind that involves three cells in each hemisphere.

Also, the cells involve zones of major wind belts, separated from each other by zones of relatively lighter winds in which the air sinks or rises.

At the doldrums, the warm air rises and flows away from the equator to about 30 degrees south and north latitude where it descends respectively.

From this wind, some of the warm air moves towards the westward direction in the form of trade winds. On the contrary, the remaining portion blows towards the east, creating the dominant westerlies.

After that, the air again rises to around 60 degrees in latitude from the boundary between westerlies and the polar easterlies and finally sinks once more at the poles.

They affect the rainfall in many equatorial regions that cause a wet and dry season of the tropics rather than the cold and warm season of higher latitudes.  In addition, the longer-term of doldrums can cause conditions like drought or flood in nearby areas.

Moreover, the doldrums becomes narrow while moving away from the equator.  In that condition, it can be interpreted as a front along the foremost edge of the equatorial air.

Besides, the cycle appears to be a 15 to 25 day in thunderstorm activity along with the doldrums. Also, it is of the half-wavelength of Madden-Julian Oscillation (MJO).

Q.1 In which direction the doldrums or ITCZ moves during the summer of the northern hemisphere?