As you know that hydrogen does not exist in the free state in our environment. Instead due to its unique bonding nature, it forms various compounds. One such important compound is Hydrogen Peroxide. It has various applications and uses. Let us study.

A peroxide is any compound which has two oxygen atoms bonded together. The O-O group is the peroxide group of the compound. And Hydrogen Peroxide is the simplest peroxide. The chemical formula for hydrogen peroxide is H2O2. It is a water molecule with one extra atom of oxygen, It has various uses ranging from disinfectant to propellant for rockets. Let us learn more about it

This is a method for laboratory preparation of Hydrogen Peroxide. Hydrated Barium Peroxide must be used, anhydrous barium peroxide will form a protective layer and not react with the sulphuric acid. The resulting H2O2 is a 5% concentrate solution.

Here too we will use a dilute solution of Sulphuric Acid and gradually dissolve sodium peroxide in it. As you know H2O2 is explosive at high temperatures, so we use cold sulphuric acid. On reacting these two we get crystals of Sodium Sulphide and a 30% solution of hydrogen peroxide. We can perform vacuum distillation on the said solution to get pure hydrogen peroxide

Learn more about the Preparation of Dihydrogen here.

Structure of the Molecule 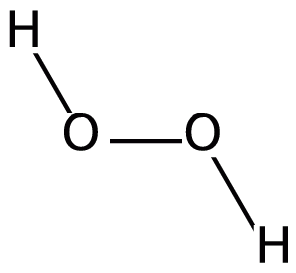 If you look at the dot diagram of H2O2 you will see the O-O bond. And you will see that both oxygen atoms have two pairs of unbound electrons each. This brings into effect the valence shell electron repulsion theory.

The hydrogen atoms will repel the unbonded electrons of oxygen. This gives a bent molecular shape. And it has a bod angel of 109.5° In its crystal form (solid state) this angel reduces due to hydrogen bonding within the molecules being formed.

Have a look at the unique position of Hydrogen in the Periodic Table.

Hydrogen Peroxide has been used as an antiseptic for minor cuts, bruises, laceration etc for years. It actually foams when it comes in contact with blood. This helps in bringing up all the germs from within the cut. The oxidizing property of hydrogen peroxide kills the germs and also inhibits the growth of microorganisms such as bacteria, virus etc. This prevents the spread of any infection.

Concentrate H2O2 is harmful and dangerous so we use only a 3% dilute solution. Also, H2O2 is normally kept in dark brown bottles to avoid any decomposition in the light. Since it is explosive at higher temperatures, one must be careful in storing H2O2.

Hydrogen peroxide is extensively used for bleaching purposes. This also comes down to the oxidizing abilities of H2O2 . When a large organic molecule has a double bond this bond absorbs light.

During an oxidizing reaction when this bond breaks it destroys pigments and removes colour. Hydrogen peroxide is a good bleaching agent for hair since its byproducts (water and oxygen) are not harmful. H2O2 is also an excellent bleaching agent for wood, tarnish and paper and textiles.

Perhaps the most significant use of Hydrogen Peroxide is in environmental protection. It finds a use in air pollution control where it is used to treat effluents from industrial waste. It is also used in the restoration of aerobic conditions to sewage and industrial waste materials.

Q: Last molecule of hydrogen is evolved from hydrogen peroxide by which of the following?

Sol: The correct answer is “A”. The last molecule of water separates from H2O by crystallization. 90% solution of hydrogen peroxide is concentrated by cooling with solid carbon dioxide and ether bath. The crystals of hydrogen peroxide are separated, melted and refrozen.