Although Hydrogen is abundantly present in our atmosphere, it is not found in the free state. And there are various uses and applications of Hydrogen for domestic and industrial purposes. So let us learn about the properties and preparation of Dihydrogen. 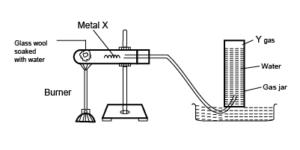 One common way to prepare dihydrogen gas in the lab is by reacting Zinc with a diluted acid. It results in Zinc forming Zinc Sulphate (or zinc chloride) and releasing hydrogen in a gas form

Zinc can also react with an aqueous alkali such as Sodium Hydroxide, The sodium and zinc will combine and give us dihydrogen as another product. The reaction is as follows

The commercial preparation of hydrogen is a huge industry because there is a huge demand for hydrogen in the production of fertilizers and oil-refining process.

Here Water Gas (a mixture of carbon monoxide and hydrogen) and steam are alternatively passed over iron at very high temperatures of up to 800 C. The iron is first oxidized releasing hydrogen and has to replaced with fresh metal. Then the iron reduces with water gas back to a metal. The reactions are as follows

This remains the cheapest way to produce hydrogen on a commercial scale. The gas is heated to high temperatures (up to 1100 C) with steam and a Nickel catalyst. This results in the methane molecules breaking into Carbon Monoxide and Hydrogen.

Question: When hydrogen burns in oxygen, water is formed and when water is electrolyzed then hydrogen and oxygen are produced. What type of a reaction takes place (i) in the first case, and (ii) in the second case