We are clear with the fact that, all matter is made out of atoms. It is important to learn about the various characteristics of an atom and related aspects that form the foundation for chemistry. If atoms are so small, do you think they would carry some mass? Let us try to decode this fact in a precise manner and learn more about atomic mass.

Atoms are the smallest components that form a chemical element. Or, we can call it the smallest substance that cannot be segmented into simpler material. It is important to note that, atoms hold specific properties that help to determine their physical and chemical nature. One of its properties termed as atomic mass is roughly equivalent to the sum of the discrete particle masses of an atom. 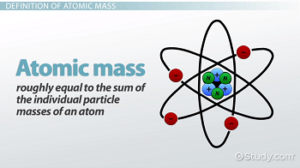 An atom has three basic components: namely, protons (+ particles), neutrons (neutral particles), and electrons (- particles). In an atom, protons and neutrons are seen as the larger particles which are present inside the nucleus (the core of atom). Therefore, atomic mass is basically calculated with the addition of a number of neutrons and protons together, keeping aside the electrons due to their small size.

Moreover, Dalton is the standard unit used to measure this mass. Always remember that the atomic mass of a specific atom will vary depending on the number of neutrons and protons. Further, it would be different for every individual element.

For carbon, the atomic mass is 12.011; most carbon atoms hold 6 protons and 6 neutrons. Moving ahead, the atomic mass of hydrogen is 1.0079. Here, hydrogen (with atomic number 1) carries the lowest atomic mass. Also, the most common hydrogen isotope is protium, which consists of a single proton or an electron and proton.

Due to the presence of the little amount of deuterium (1 neutron and 1 proton) and tritium (1 proton and 2 neutrons), hydrogen has an atomic mass considerably greater than 1.

If you are new to this subject, then your instructor would surely want you to learn the use of the periodic table. This is the convenient way to find the atomic mass of any specific element. The number generally is written below an element’s image or symbol is the atomic mass. Do search for the decimal number, i.e. the weighted average of the atomic masses for all the natural isotopes associated with the element.

This value mentioned in the periodic table is basically in amu or atomic mass unit. However, for chemistry calculations, one must use the atomic mass written in g/mol (grams per mole).

Addition of Protons and Neutrons Considering a Single Atom

Weighted Average for All Atoms Present In an Element

For an element, the atomic mass is the weighted average of all the element’s isotopes depending on their regular abundance. Typically, in order to calculate the atomic mass using this method, you will be offered a list of isotopes along with their mass and natural abundance (decimal or percent value).

You only have to multiply every isotope’s mass with its abundance. In case your abundance is available in percent, do not forget to divide your solution by 100. Finally, add the values together and the answer is the total atomic mass of the element.

Q1. Chlorine (Cl) has a relative atomic mass of 35.5. What is the reason for this half number?

Ans: The presence of isotopes is the prime reason for the half number.

Q2. The relative atomic mass of oxygen atom is 16. What does this mean?

Ans. The relative atomic mass of an atom is the average mass of that atom in comparison to the 1/12th mass of one carbon – 12 atom.