Quantum mechanics, Quantum physics, the theory of relativity, etc are the modern subjects that interests, astound, and confuse almost everybody. These topics form the basis of modern physics. However, the very first-time quantum theory was incorporated in Bohr’s Model of an atom or Bohr atomic model. Later this model became the predecessor of complete quantum mechanical models.

The physicist Niels Bohr said, “Anyone who is not shocked by quantum theory has not understood it.”  He also said, “We must be clear that when it comes to atoms, language can only be used as in poetry.” So what exactly is this  Bohr atomic model? Let us find out!

Bohr atomic model and the models after that explain the properties of atomic electrons on the basis of certain allowed possible values.  The model explained how an atom absorb or emit radiation when electrons on subatomic level jump between the allowed and stationary states. German-born physicists James Franck and Gustav Hertz obtained experimental evidence of the presence of these states.

A Danish physicist named Neil Bohr in 1913 proposed the Bohr atomic model. He modified the problems and limitations associated with Rutherford’s model of an atom.  Earlier in Rutherford Model, Rutherford explained in an atom a nucleus is positively charged and is surrounded by electrons (negatively charged particles).

What is Bohr’s Model of an Atom? 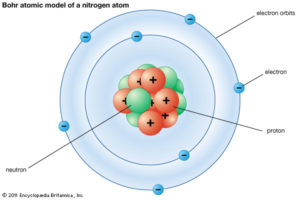 The orbits continue to increase in a similar manner.

Distribution of Electrons in Orbits or Shells:

Electronic distribution of various orbits or energy levels can be calculated by the formula 2n2. Here, ‘n’ denotes the number of orbits.

We can determine the maximum number of electrons in a similar way.

Limitations of Bohr’s Model of an Atom

The following are the fundamental limitations of Bohr’s Model of the hydrogen atom.

What are Isotopes? Learn the concept of Isotopes and Isobars.

Example 1: Calculate the maximum number of electrons an o shell can hold.

Example 2: What happens when an electron changes its orbit from outer to inner energy? Energy remains constant

Solution: The answer is 4. Energy is released when an electron jumps from higher to lower energy level.