In 1898, J. J. Thomson proposed the first of many atomic models to come. He proposed that an atom is shaped like a sphere with a radius of approximately 10-10m, where the positive charge is uniformly distributed. The electrons are embedded in this sphere so as to give the most stable electrostatic arrangement. 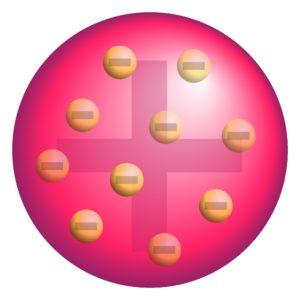 Doesn’t the figure above remind you of a cut watermelon with seeds inside? Or, you can also think of it as a pudding with the electrons being the plum or the raisins in the pudding. Therefore, this model is also referred to as the watermelon model, the plum pudding model or the raisin pudding model.

An important aspect of this model is that it assumes that the mass of the atom is uniformly distributed over the atom. Thomson’s atomic model was successful in explaining the overall neutrality of the atom. However, its propositions were not consistent with the results of later experiments. In 1906, J. J. Thomson was awarded the Nobel Prize in physics for his theories and experiments on electricity conduction by gases.

The second of the atomic models was the contribution of Ernest Rutherford. To come up with their model, Rutherford and his students – Hans Geiger and Ernest Marsden performed an experiment where they bombarded very thin gold foil with α-particles. Let’s understand this experiment.

In this experiment, high energy α-particles from a radioactive source were directed at a thin foil (about 100nm thickness) of gold. A circular, fluorescent zinc sulfide screen was present around the thin gold foil. A tiny flash of light was produced at a point on the screen whenever α-particles struck it. 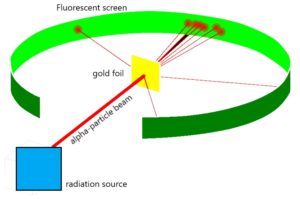 Based on Thomson’s model, the mass of every atom in the gold foil should be evenly spread over the entire atom. Therefore, when α-particles hit the foil, it is expected that they would slow down and change directions only by small angles as they pass through the foil. However, the results from Rutherford’s experiment were unexpected – 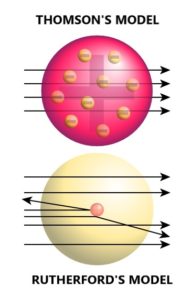 Conclusions of the α-scattering experiment

Based on the above results, Rutherford made the following conclusions about the structure of the atom:

Nuclear Model Of The Atom

Based on his observations and conclusions, Rutherford proposed his model of the structure of the atom. According to this model –

Thus, Thomson and Rutherford’s atomic models revealed key aspects of the structure of the atom but failed to address some critical points. Now that we know the two atomic models, let’s try to understand a few concepts.

As we know now, a positive charge on the nucleus is due to the protons. Also, the charge on the proton is equal but opposite to that of the electron. Atomic Number (Z) is the number of protons present in the nucleus. For example, the number of protons in sodium is 11 whereas it is 1 in hydrogen, Therefore, the atomic numbers of sodium and hydrogen are 11 and 1, respectively.

= the number of electrons in a neutral atom

Isobars are atoms with the same mass number but a different atomic number. For example, 146C and 147N.

Isotopes, on the other hand, are atoms with the same atomic number but a different mass number. This means that the difference in the isotopes is due to the presence of a different number of neutrons in the nucleus. Let’s understand this using hydrogen as an example –

Question 2: Calculate the number of protons, neutrons, and electrons in 5626Fe.