Although Bohr’s model of the atom is the most commonly used model, scientists continued to develop new and improved models for the atom. Two concepts that contributed significantly to the development of improved models were – the Dual behaviour of matter and the Heisenberg uncertainty principle. Let’s learn about these concepts in more detail.

In 1924, de Broglie, the French physicist proposed that matter, like radiation, should show dual behaviour i.e. both wave-like and particle-like properties. This means that just like photons, electrons should also have a wavelength as well as momentum. From this, de Broglie gave an equation that relates wavelength and momentum of a material particle –

An electron microscope achieves a magnification of about 15 million times and therefore is a powerful tool in scientific research. According to de Broglie, every object in motion has a wave-like character. The wave properties of ordinary objects are hard to detect because their wavelengths are so short.

However, experimental detection of the wavelengths associated with electrons and other sub-atomic particles is possible. For example, to find out the wavelength of a ball of mass 0.1 kg moving with a velocity of 10ms-1, we will use de Broglie’s equation –

In 1927, the German physicist, Werner Heisenberg came up with the uncertainty principle as a result of concepts like the dual behaviour of matter and radiation. 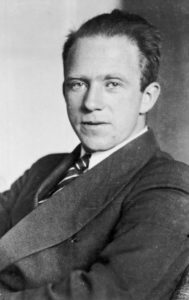 His principle states that – It is impossible to determine, simultaneously, the exact position and exact momentum (or velocity) of an electron. He gave the following equation –

The Significance of Uncertainty Principle

For a microscopic object like an electron, ∆v.∆x is much larger and the uncertainties are of real consequence. For example, for an electron with a mass of 9.11 x 10-31 kg, according to the Heisenberg uncertainty principle –

This means that if you try to find the location of an electron to an uncertainty of about 10-8m, then the uncertainty ∆v in velocity would be –

Reasons for Failure of Bohr Model

Thus, we did not extend Bohr’s model to other atoms because of these limitations. New models were needed that could account for the wave-particle duality of matter and be consistent with Heisenberg’s principle. This led to the advent of quantum mechanics.

Solution: According to de Broglie’s equation, we know that –

where λ is the wavelength, h is the Planck’s constant, m is the mass of the particle and, v is the velocity.

So substituting the appropriate values, we get –