Units of measurement of data

Machine language is binary. And so it is necessary to discuss how to measure the data stored in a computer. Bit and Byte are the units to measure data.

The term ‘bit’ is a contraction of the words ‘binary’ and ‘digit’. It is the smallest unit of memory or instruction that can be given or stored on a computer. A bit is either a 0 or a 1. The number in the above example is a 6-bit number as it has 6 binary digits (0s and 1s).

A group of 8 bits like 01100001 is a byte. Combination of bytes comes with various names like the kilobyte. One kilobyte is a collection of 1000 bytes. A word or letter like ‘A’ or ‘G’ is worth 8 bits or one byte. One thousand bytes make up a kilobyte (one thousand letters approximately). 1024 kilobytes form a Megabyte (Mb) and so on. 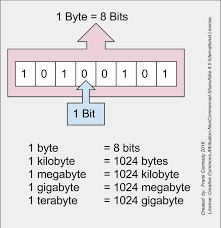 Q 1 A number system uses 10 as the base. The number is 654. What is the LSB and MSB of this number?
A) 6 and 4 B) 4 and 6 C) 0 and 1 D) 10 and 01.
Answer: MSB stands for the most significant Bit and the LSB stands for the Least Significant Bit. If you take a look at the number 654, we ought to represent it in a base 10 (Decimal number system).
So we can write it as 6×102 + 5×101 + 4 x100. Thus the number 6 is the most significant in the sense that it contains the bulk of the value of the number. And the number 4 is the least significant bit because it contains the least bulk of the value. Hence the answer is B that is 4 and 6. We can say that in the decimal representation, the number to the left is the MSB and the number to the right is the LSB.

Preparing for a job exam and can’t find the complete coverage of topics? No worries we are here to help!

Q 1: How would you represent 10111 in the decimal number system?

Stay updated and don’t get stuck in an exam. Prepare your General Awareness topics here.