The odd one out section is a very scoring section of the vocabulary section. This section is asked majorly in the IBPS PO, IBPS SO, SBI, RBI, and other similar exams. The questions in the Odd one out section are designed to check your vocabulary. The questions are generally formulated in a way where you are provided with a set of given words that are related in some way. There is one option that doesn’t relate to the other words in the same way, which becomes the Odd one out.

Let us see what does odd one out means with the help of some examples.

These questions are based on the straightforward word-meaning logic. The words are provided in groups and you are asked to pick out the odd word or the odd group. Let us see some examples. 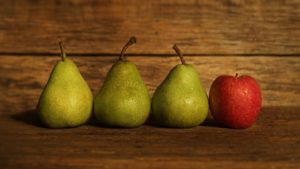 Q: Pick the option that doesn’t belong to the following classification.

Answer: This will tell you that there are no shortcuts to a good vocabulary. Let us see the options one by one. Caustic means something that is corrosive, a mordant. Vitriolic means something that is bitter or unpleasant. Hence the three words have a somewhat similar meaning. Now we have brazen which means a thing or a person which is bold and without shame. Hence the odd one out here would be B) Brazen.

These type of questions will give you a set of sentences and will ask you to pick a sentence that doesn’t belong to the given set of questions. Let us see some examples of the same.

Q: The following sentences are labelled A, B, C, and D. They form a paragraph and/or a logical set. Pick out the one that doesn’t belong.

Answer: If you read the sentences aloud, they are all talking about either the Shang dynasty or the copper age civilizations except the option C which talks about the Bronze civilizations. Hence the odd sentence here is C.

Q: The following sentences are labelled as A, B, C, and D. They form a paragraph and/or a logical set. Pick out the one that doesn’t belong.

Answer: The options from A through D talk about a democracy. But the option A talks about the democracy in India, a concept that is not shared by any of the other options provided in the question. hence the correct option is A. India is often described as the world’s largest democracy.

In these questions, you will find sentences with rather convoluted words and meanings. You will have to be very careful even though the possibility of such question being asked is very low, but it is better to be ready. Let us see an example.

Q:  The following sentences are labelled as A, B, C, and D. They form a paragraph and/or a logical set. Pick out the one that doesn’t belong.

Answer: All of the sentences talk about the Vedas. So which one is the one that doesn’t belong? Consider each sentence one by one.

Option B through D, talk about the Vedas and the caste system. In all of these sentences, the caste system or the stratification of the society is the main topic, so these are related to each other. hence, the correct option here is A.

Q 1: Pick the option that doesn’t belong to the following classification.

Q 2: The following sentences are labelled as A, B, C, and D. They form a paragraph and/or a logical set. Pick out the one that doesn’t belong.