Fill in the blanks section of the exam will prompt the candidates to use their vocabulary to complete sentences that have missing words in them. The words that go in the blanks could be anything. They could be models, articles, words, phrases, idioms etc. Here we will see all types of questions that you may encounter in the exam. Let us begin!

Fill in the Blanks

In this type of questions, the sentences will be given and you will be prompted to find the options that best fit the blanks. Complete the following sentences using the words given at the end.

Answer: To select the correct option, always make sure that after you have selected a suspected option, you read out the sentence aloud and try to see which option makes the most sense. Cornwall is a place and thus the correct article to go in would be “in”. Also with the sea, we use to which shows that the mines are closed. Therefore the correct option is A) in, to and the complete sentence will be: “The most celebrated tin mines in Cornwall are, still, close to the sea.” 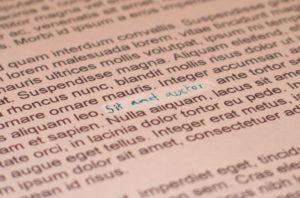 2.Complete the following sentence using the words given at the end

Answer: Again use the options that seem appropriate and read out the sentence once. The option for the first blank should be “covered” as the other words are less suitable. Similarly, the option that goes in the second blank will be “greater” as can be seen from the option that is B) covered, greater.

There may be excerpts from novels and books. These paragraphs would have a meaning and the missing word will be crucial to the completion of the meaning in one way or the other. Let us consider the following solved examples.

Example 1: At eleven he had a horror of death. Within six impressionable years, his parents had died and his grandmother had faded off almost _______, until, for the first time since her marriage, her person held for one day an unquestioned supremacy over her own drawing room.

Answer: When you answer questions like these make sure that you read all the parts of the paragraph. For example, here if you focus only on the first part only, you will see that every option fits the blank perfectly. So for the answer, the first part is not relevant. In the second part, you should see that the sentence talks about the grandmother. It says that one day, for the first time the grandmother ” held an unquestioned supremacy.” This hints at the fact that the death of the grandmother was not a crucial or a great impact on the subject of the sentence. So the blank should be filled with something of a similar meaning. Something not that important or in other words A) imperceptible.

There will be questions that require you to read a complete paragraph to be able to answer correctly. However, there will always be a hint, either in the beginning or at the end of the paragraph that should open it up for you.

Read the following paragraph and fill in the blanks.

At sixteen he had lived almost entirely within himself, a _______ boy, thoroughly un-American, and politely bewildered by his contemporaries. The two preceding years had been spent in Europe with a private tutor, who persuaded him that Harvard was the thing; it would “open doors,” it would be a tremendous tonic, it would give him innumerable self-sacrificing and devoted friends. So he went to Harvard–there was no other logical thing to be done with him.

Answer: If you read the paragraph, and try out each option once, you will see that the option is C) inarticulate. The reason for it is in the first sentence itself. The first part says that the boy lived almost entirely within himself. That means he was shy. The rest of the paragraph qualifies this quality. So the correct option is C).

Q 1: Fill in the blanks in the following sentence: “He learned that he was looked upon as a rather romantic figure, a scholar, a recluse, a tower of ______.”

Q 2: Read the following paragraph and fill in the blanks.

“He returned to America in 1912 because of one of his grandfather’s sudden illnesses, and after an excessively tiresome talk with the perpetually _____ old man he decided to put off until his grandfather’s death the idea of living permanently abroad. After a prolonged search, he took an apartment on Fifty-second Street and to all appearances settled down.”