Conjunctions are connecting or linking words that help join a group of words, phrases or sentences into one. They are of three types based on their use and function, Coordinating, Subordinating and Correlative. Here we will learn more about Subordinating Conjunctions and their uses.

A subordinate or dependent clause is one which cannot exist by itself as a sentence and only provides some additional information to the main clause. Sentences where there is an independent and at least one dependent clause, it is known as a complex sentence. Subordinating conjunctions are therefore found in complex sentences where they try to join or link the clauses together. 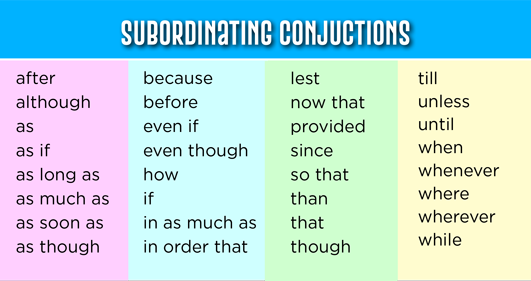 Subordinating conjunctions that show Cause and Effect

Subordinating conjunctions that show the significance of Time or Place

Few subordinating conjunctions are used to show the transition of place or time. Examples of this type of conjunctions are where, wherever, as soon as, as long as, once, when, till, until, while, whenever etc. Some examples are given below

Using a comma with Subordinating Conjunctions

Q: Fill in the correct subordinating conjunction to fill in the blank in the following sentence.

Ans: (d) Whenever. The sentence begins with ‘I make it a point’ which indicates that the action performed by the individual is a regular one or occurs after intervals. So, the conjunction which we use is option b) whenever which indicates a repetitive event or occurrence.

‘When’ is used in a one-time event and so option a) is wrong. Option c)wherever is a subordinating conjunction which indicates place and not time as is required by the sentence. option d) because is incorrect as it is used to show a cause-effect scenario.