Martin Luther King Jr. was an African-American leader in the U.S. He lost his life while performing a peaceful protest for the betterment of blacks in America. His real name was Michael King Jr. He completed his studies and attained a Ph.D. After that, he joined the American Civil Right Movement. He was among one of the great men who dedicated their life for the community. 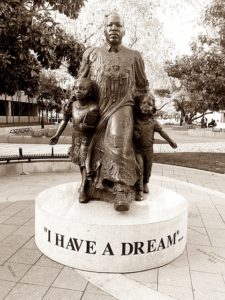 Reason for Martin Luther King to be famous

Martin Luther King was an American activist, minister, and humanitarian. Also, he had worked for several other causes and actively participated in many protests and boycotts. He was a peaceful man that has faith in Christian beliefs and non-violence. Also, his inspiration for them was the work of Mahatma Gandhi and Nelson Mandela. For his work in the field of civil rights, the Nobel Committee awarded him the Nobel Peace Prize.

He was a great speaker that motivated the blacks to protest using non-violence. Also, he uses peaceful strategies like a boycott, protest march, and sit-ins, etc. for protests against the government.

King is one of the renowned leaders of the African-American who worked for the welfare of his community throughout his life. He was very famous among the community and is the strongest voice of the community. King and his fellow companies and peaceful protesters forced the government several times to bend their laws. Also, kings’ life made a seismic impact on life and thinking of the blacks. He was among one of the great leaders of the era.

As we know that King was a civic leader. Also, he has taken part in many civil right campaigns and boycotts like the Bus Boycott, Voting Rights and the most famous March on Washington. In this march along with more than 200,000 people, he marched towards Washington for human right. Also, it’s the largest human right campaign in U.S.A. history. During the protest, he gave a speech named “I Have a Dream” which is history’s one of the renowned speeches.

During his life working as a leader of the Civil Rights Movement he makes many enemies. Also, the government and plans do everything to hurt his reputation. Martin Luther King was assassinated in 1968. Every year the US celebrates his anniversary as Martin Luther King Jr. day in the US. Also, they honored kings’ memory by naming school and building after him and a Memorial at Independence Mall.

Martin Luther King was a great man who dedicated his whole life for his community. Also, he was an active leader and a great spokesperson that not only served his people but also humanity. It was due to his contribution that the African-American got their civil rights.