A lot of major developments were seen in the previous year in the field of economy. We have compiled a list of such events that made the news from the month of April through the month of June. Let us now see the economy in the news – April.

Economy In The News – April to June

Digital Payments to Grow at 26% Report

World Payment Report stated that the initiatives of the government and the National Payments Council of India will help non-cash transactions grow at a compound annual growth rate of 26.2 % during 2016 to 2020. The World Payment Report 2017 was jointly commissioned by Capgemini and BNP Paribas. The report is about digital payments and transactions all around the world and their progress.

In yet another move in India against black money, markets regulator Sebi barred resident as well as non-resident Indians from making investments through participatory notes (P-Notes). P-notes are mostly used by overseas individual investors, hedge funds and foreign institutions to invest in the Indian securities markets through registered foreign institutional investors (FIIs).

Paytm launched Digital Gold in collaboration with accredited refinery MMTC-PAMP, which allows users to buy, sell and even store gold. This new service will enable users to request their gold to be delivered at their home in the form of minted coins. Customers can store it in MMTC-PAMPs secure vaults free of charge.

NABARD under its EShakti initiative has so far digitised around 1.29 lakh self-help groups covering 14.86 lakh individuals in the country. The aim of the initiative is to digitise all SHGs under its Micro Credit and Innovations Department and reduce the drudgery of bookkeeping and cut the dependence on cash transactions. The pilot project at Ramgarh, Jharkhand & Dhule, Maharashtra in 2015.

The Cell for IPR Promotion and Management (CIPAM) has begun an IPR Awareness campaign in schools across the country. It has been launched in collaboration with the International Trademark Association. The campaign was kicked off at Kendriya Vidyalaya, RK Puram Sector 2, New Delhi. The National Intellectual Property Rights Policy was approved by the govt on May 12, 2016.

Enterprise application software maker SAP launched a solution for SMEs to help them become compliant with the Goods and Services Tax (GST). SAP has launched ‘GST in a box’, an all-inclusive solution portfolio designed to help SMEs. SAP has committed to provide businesses with the necessary consultation and technology to efficiently adapt the GST regime through various initiatives.

Kia Motors to invest in India

Kia Motors is lining up around $1.1 billion to set up a manufacturing plant in India. The South Korean firm, part of the Hyundai group, will sign a MoU with the Andhra Pradesh government to build a new plant in Anantapur district. It will roll out a compact SUV and a compact sedan by 2019-end.

LIC has introduced two endowment assurance plans for individuals having Aadhaar card. Aadhaar Shila is a plan exclusively designed for women, the other scheme Aadhaar Stambh is meant for men. These plans offer a combination of protection and savings and provide a lump-sum amount in case of death of the policyholder to the person’s family.

Food delivery startup Swiggy has raised $80 million in Series E funding led by Naspers. As a result of Naspers’ investments, its head of Indian investments will take a seat on the Swiggy board of directors. Swiggy has over 12,000 restaurants on its delivery platform and delivers meals within 37 minutes of an order. Earlier this month, Naspers had invested $425 million in Delivery Hero. 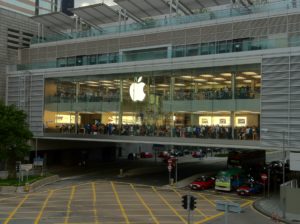 Apple has opened its first store in Southeast Asia at Singapore’s upmarket shopping district. Located on the affluent Orchard Road, the new shop – easily distinguished by its iconic glass façade – is expected to be one of the most popular Apple stores in the world. Apart from Singapore, it has shops located in Hong Kong, China and Japan in Asia.

Reliance Industries is the highest ranked Indian firm in Forbes magazine’s ‘Global 2000’ list for 2017. 58 Indian companies featured this year. HDFC, ICICI, Axis and Kotak Mahindra are among the top 20 Indian companies in the list. RaThe rankings based on a mix of 4 metrics – Sales, Profits, Assets, and Market value.

Reliance Industries has regained the status of country’s most valued firm, overtaking Tata Consultancy Services in terms of market valuation. TCS had replaced RIL as the most valued firm more than 4 years ago but a sharp rally in a share of RIL in the recent past has helped the company close the gap. So far in 2017, shares of RIL have gained nearly 33%, while TCS is trading flat, down 0.05%.

RBI has expanded the overseeing committee by appointing 3 more members. The new members are MBN Rao, Y M Deosthalee, and S Raman. Pradeep Kumar will head the now 5-member panel that will work through multiple benches.

Asian Development Bank and Govt of India has signed a $275 million loan for improving urban services in 64 small towns in the State of Madhya Pradesh.  It will develop sustainable, inclusive and climate resilient water supply in 64 small and mid-sized towns.

Hike Messenger has launched a new version of the app with a completely new interface and the addition of a mobile wallet. It has partnered Yes Bank to facilitate money transfers to banks using UPI system. Wallet will allow instant money transfer among its clients and enable fund transfer to banks using UPI. Hike Messenger is the first messaging platform in India to launch payments facility.

Meghalaya govt has signed 2 MoUs with the State Bank of India as a part of an initiative towards migrating government transactions to digital mode. Finance department signed 2 MoUs with the StateBank of India for their SBI ePay and SBI CMP facilities. SBI CMP will help the state govt to make its payments online and will reduce paperwork and manual reconciliation of govt transactions.

D) None of the above.