All condensed matter (solids, liquids, and dense gases) emit electromagnetic radiation at all temperatures. Also, this radiation has a continuous distribution of several wavelengths with different intensities. This is caused by oscillating atoms and molecules and their interaction with the neighbours. In the early nineteenth century, it was established that each element is associated with a characteristic spectrum of radiation, known as Atomic Spectra. Hence, this suggests an intimate relationship between the internal structure of an atom and the spectrum emitted by it.

Normally, one would expect to find a regular pattern in the frequencies of light emitted by a particular element. Let’s look at hydrogen as an example. Interestingly, at the first glance, it is difficult to find any regularity or order in the atomic spectra. However, on close observation, it can be seen that the spacing between lines within certain sets decreases in a regular manner. Each of these sets is a spectral series.

Further, let’s look at the Balmer series in detail. 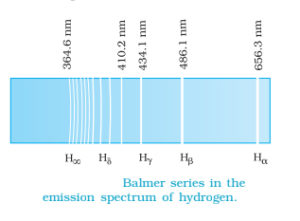 In 1885, when Johann Balmer observed a spectral series in the visible spectrum of hydrogen, he made the following observations:

Further, for n=∞, you can get the limit of the series at a wavelength of 364.6 nm. Also, you can’t see any lines beyond this; only a faint continuous spectrum.Furthermore, like the Balmer’s formula, here are the formulae for the other series: