We all have come across the word “radioactivity” somewhere or the other. Do you know an isotope form the basis of radioactivity? Many times terms like nuclear energy, nuclear reactors, and nuclear weapons have popped up in news and textbooks. We have read stories and watched movies about superheroes born out of some sort of radiation exposure. What is radioactivity and how it is associated with isotopes?

Radioactivity is one of the properties of atoms. Every radioactive atom will have an unstable nucleus. Thus it has a tendency to release subatomic particles to obtain stability thereby releasing radiation or energy in the process. Elements or atoms are present both in radioactive and non-radioactive variety.

The number of neutrons in both the varieties will be different. These different varieties of the same element are termed isotope. Read through this article to find out more about isotopes. 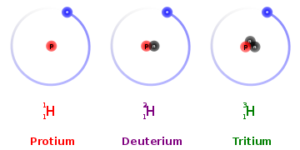 Carbon has three isotopic forms- Carbon-12, Carbon-13, as well as Carbon-14. The numbers 12, 13, and 14 represents the atomic masses of different isotopic forms of carbon. As discussed, atomic number is the unique property by which we can determine the element. Therefore, the atomic number 6 of carbon in all the forms is constant. Carbon-12 is the stable isotope of the carbon element whereas carbon-14 is the radioactive isotope.

There are approximately 275 different isotopes of 81 stable elements. There are more than 800 natural and synthetic radioactive isotopes present. A single element present in the periodic table can have multiple isotopic forms.

Generally, the chemical properties of isotopes of any element are almost identical. The exception to this case is the isotopes of hydrogen because the numbers of neutrons have a major effect on the size of the nucleus of a hydrogen atom.

Question: Isotopes of a single element vary in the number of