In view of the coronavirus pandemic, we are making LIVE CLASSES and VIDEO CLASSES completely FREE to prevent interruption in studies
Physics > Mechanics > Parachute – Parts and How Does it Work?

A parachute refers to a device which slows down the vertical descent of a body which falls through the atmosphere. The way parachutes works have amazed people for years. Students can learn how a parachute works here:

A Parachute is a device that slows down an object’s motion. An object which is falling through an atmosphere by creating drag. It is made out of light, strong fabric.

Furthermore, this fabric was originally silk, but now it is mostly nylon. Moreover, they mostly have a dome shape. However, they can also be rectangles, inverted domes, and others found. 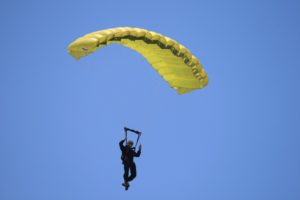 There can be an attachment of a variety of loads to parachutes, which include people, food, equipment, bombs, and space capsules.

Parts of a Parachute

The design of parachutes is for one fundamental purpose. This purpose is to slow the gravity-driven fall of an object, for example, a person.

Parachutes do so by taking advantage of atmospheric drag. Atmospheric drag refers to a physical quantity that to engineers is mostly a nuisance rather than a boon.

The greater the drag of a parachute would mean more slowly an object attached to that parachute descends to Earth. Furthermore, a parachute would not work in a vacuum. This is because it would have no molecules of air to pull against.

The main part of a parachute is certainly a canopy. Moreover, this canopy balloons outwards as the payload begins to falls. Most noteworthy, the canopy’s shape is the most important determinant of a parachute’s behaviour.

The earliest round parachutes were circular when they were flattened out. This made them quite unstable in action as there was resistance in the formation of a dome shape. Consequently, a huge number of fatal injuries were the result because of that.

Later on, came the military-build round parachutes. These were much better in their work efficiency because they were parabolic in shape.

Furthermore, some round parachutes are not steerable. Therefore, they cannot be effectively controlled and travel in accordance with the prevailing wind conditions.

Steerable round parachutes consist of holes cut in the edges of their canopies. This allows their passengers to exert a greater degree of landing control. There is the frequent use of round parachutes in medical missions and in dropping military cargo.

The original round and conical parachute have been replaced by the ram-air or parafoil parachute. This type of chute certainly has a self-inflating canopy.

Consequently, it creates a much larger drag force resistance on deployment in comparison to a round model. Furthermore, its terminal velocity is obviously slower.

Ribbon or ring parachutes are suitable for fliers in aircraft travelling at supersonic speeds. These parachutes have holes built into the canopy which reduces the pressure to which we subject the material to. Furthermore, these holes are not large enough.

Q1 Which of the following is not true with regards to parachute?

A. It refers to a device which slows down the motion of an object falling through an atmosphere
B. It slows the motion by taking advantage of atmospheric drag.
C. The main part of a parachute is certainly a canopy
D. The round parachutes are suitable for fliers in aircraft travelling at supersonic speeds

Share with friends
Previous
Skeletal Muscle - Structure, Functions, Examples
Next
What is Magnetometer and How Does it Work?

Hey wassup, how did you end up here bruv?😂