Deoxyribonucleic acid or DNA is a molecule made of two polynucleotide chains. These coils form a complex double helix carrying genetic instructions for the development, functioning, growth, and reproduction of all living organisms. The two strands of double-stranded DNA store the same biological information which is replicated as and when the two strands separate.

RNA full form Ribonucleic acid is a kind of polymeric molecule. It helps in various biological roles such as coding, decoding, regulation, and expression of genes. Messenger RNA (mRNA) in cellular organisms helps to convey genetic information that directs the synthesis of specific proteins.

Difference Between DNA and RNA 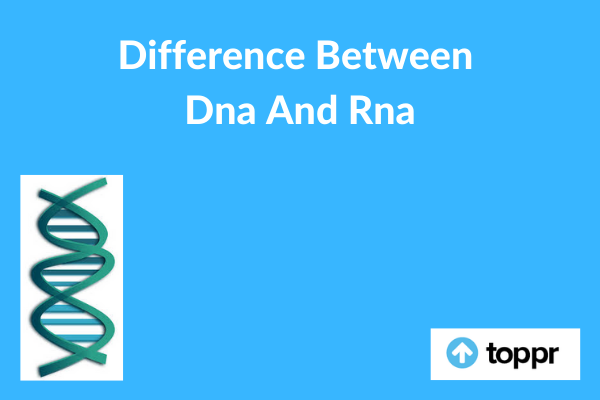 Difference Between DNA and RNA

The important difference between DNA and RNA

We must learn in detail to find out more about DNA and RNA.

DNA was first founded by Friedrich Miescher in 1869. In February 1953, Watson and Crick completed their model, which is now accepted as the first correct model of the double-helix of DNA. DNA is a long polymer chain made from repeating units called nucleotides. Each of these nucleotides is symbolized by a single letter. It is a nucleic acid.

Deoxyribonucleic acid (DNA) contains the genetic instructions for the development and function of living things. DNA in the cell stores information for a long-term period. The information is held in the sequence of pieces of DNA called genes.

There are three different DNA types:

In 1868, Friedrich Miescher discovered Nucleic acids. He named the material ‘nuclein’ since it was found in the nucleus. Leslie Orgel is the father of the RNA. He was a chemist and established a world theory of the origin of life.

RNA is present in all biological cells. It is an important biological macromolecule principally involved in the synthesis of proteins, carrying the messenger instructions from DNA, which itself contains the genetic instructions required for the development and maintenance of life.

4 types of RNA encoded by its own type of gene are:

FAQs about DNA and RNA:

Ans- One can recover DNA from clothes exposed to water for more than 1 week. In summer, the time period for erasing the bulk of DNA was 4 hours regarding epithelial samples and more than 1 day for blood samples in the pond and river environments.